I must lead off by saying that I’ve thoroughly enjoyed this discussion, and would like once again to thank Ilya for writing such a provocative and important book, Heather Gerken and Jeffrey Freidman for generating such scintillating discussions, and Cato Unbound for inviting me to participate. Truth be told, I feel as if we’ve only scratched the surface of this fascinating and important topic. But alas, time’s winged chariot hurries near, and this issue must draw to a close.

Ilya’s response is a clever analogy: that before you can evaluate the performance of an attending physician, you’d have to know what the patient looked like hours before. In other words, while the country was worse off economically than it had been years before, a good share of the drop-off in economic performance could be ascribed to George W. Bush.

However, consistent with Ilya’s view of what a well-informed voter might conclude, the exits from 2010 actually found that only 24 percent of voters blamed Barack Obama for the state of the economy, with Wall Street leading and George W. Bush a close second (incidentally, among these three choices, this is probably correct, if a bit misapportioned).  In other words, voters knew that an earlier surgeon hadn’t done such a great job.  Knowing that, they also weren’t impressed with the job the new surgeon they had hired had done to turn things around.

If we really want to beat this analogy to death, there’s no doubt that a surgeon will be able to assess the condition of a patient better than a layperson.  But you don’t need a surgeon’s level of knowledge to be concerned that your child is still having trouble getting out of bed a week after tonsil surgery, notwithstanding the she might have shown some improvement. You’d still identify the child as very ill and respond accordingly.

But to get out of the weeds a bit, if there is one area that I am confident the American voters are making reasonably rational judgments, at least net, it is with respect to evaluating the state of the economy. Almost every model of presidential and midterm elections has an economic variable included, and most of the variables come back with a statistically significant relationship. For example, here is the relationship between income growth in an election year and the incumbent party’s vote share (source): 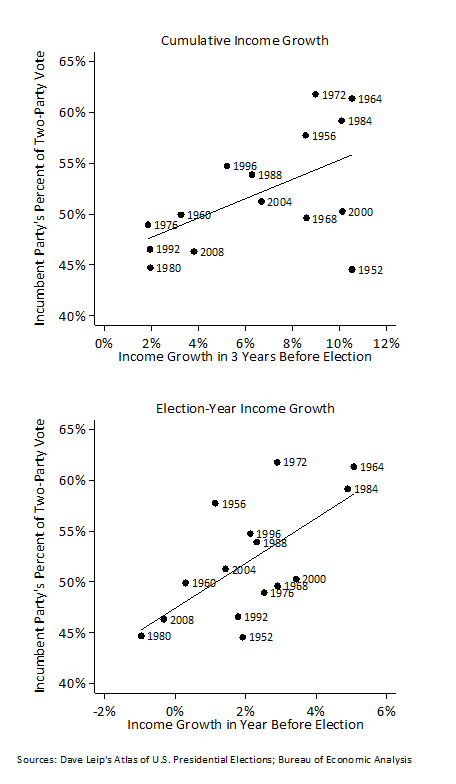 If Americans were truly ignorant of basic facts, we wouldn’t see this sort of relationship. Now it’s not perfect, and other factors do intrude (see 1952, 1972).  It’s even possible that a higher level of knowledge would result in a weaker correlation, since voters might reasonably blame the preceding party entirely for economic conditions at election time. But, of course, the further we remove ourselves from basic facts and closer we come to the realm of analysis, the less clear the correct answer is (if there is indeed any such thing.)

Likewise, to the extent TARP was an issue in 2010, voters were probably wise to blame Obama somewhat for it.  He gave the bill his blessing as the Democrats’ 2008 nominee, which gave cover to Democrats to vote for it.  He asked Bush to disburse additional funds for it.  It is my understanding that at least some of the auto bailout funds were drawn from TARP monies as well. In other words, the average voter would hardly be irrational to associate President Obama with the bailout.

Turning to the bigger picture here, perhaps it is best to visualize things this way: Imagine a world where all 130 million voters from the 2012 elections could be organized from the most knowledgeable to the least knowledgeable.  Where is the point at which we say “okay, this person is knowledgeable enough to make a good choice?”

There’s really no objective answer to this question, and we must also contemplate the possibility – a very real one, in my estimation – that the level of knowledge you’d really need to make informed decisions is quite a bit above that of even the most well-informed voter today. Given the performance of the “best and brightest” over the past couple of decades, my confidence that they have some special knowledge that enables them to do a particularly better job than the first 100 names in the Boston phone book has ebbed quite a bit from an already low degree of certitude.

Ilya’s suggestion of decentralization and foot voting as the answer to these problems is a clever one. If we’re really concerned about an electorate that doesn’t know the rate of growth, or what state Dick Cheney hails from, I’m not convinced that the electorate will be able to cast educated “foot votes” either.  This issue is being fleshed out in other discussions, and I don’t really want to address it now.  I’ll just note that this does have quite a bit of bearing on the question of “how much better” the alternative to the status quo is, which must necessarily be weighed against the impingements on liberty that Ilya suggests.

As to my final point, I think Ilya inadvertently misconstrues it a bit.  My belief—and he’s correct, it is difficult to measure it—is that the highly educated, narrow, elite electorate of the early 1800s—pre-universal white manhood suffrage—produced awful policies at roughly the same rate as our current undereducated, broad, populist electorate.  We produced Smoot Hawley and steel tariffs, they produced the Tariff of 1828.  We gave birth to Vietnam and the Iraq War, they engaged in the War of 1812. We came up with Richard Nixon, they came very close to giving us Aaron Burr; Thomas Jefferson buying off an elector is all that saved us from that fate. We suffered horrible recessions from 1789 to 1793, from 1807 to 1810, from 1815 to 1821, and for most of the 1820s.

In other words, it is about as close to a controlled experiment as we’re likely to get, and it doesn’t suggest that an educated electorate performs all that much better than an uneducated one.  Ilya points out that the decentralized nature of the country suggests that we wouldn’t perform worse, but if our standard becomes “not worse,” then why would we tolerate the restriction on the people’s ability to legislate? It’s also worth noting that Ilya’s suggestion that voters today have more access to education or knowledge suggests that perhaps voter ignorance isn’t the inevitable, rational outcome over time.

In closing, I’d like to reiterate what an important book this is.  To a certain degree, I’m playing devil’s advocate here.  I would love to see a more educated electorate, especially on economic matters. Anyone who watches political discussions on Facebook probably spends half of his time cringing, although there’s a reasonable chance that the participants cringe right back if the viewer interjects his view.

Ilya is hardly the first person to recognize this problem, which has a long political pedigree. What is different here is that Ilya is reluctant to resort to restrictions on the franchise or other solutions that have been proposed over time.  His decentralization/foot-voting solution is probably the least-restrictive solution out there, and if we are eager to do something about the problem of voter ignorance, it is probably the best solution proposed to date.  But I’m just not convinced the problem is so serious that we really need to do anything.