Time for One America, Not Two

To read Ilya Shapiro and David Gans, one would think there are two Americas. Many Americans, like Gans, applaud the developments that Shapiro and others lament: free contraceptives, laws protecting LGBT folks from discrimination, laws that separate church and state when it comes to public funds.

Other Americans share Shapiro’s intuition: blame for collisions between religion and the state properly lies with the growing administrative state and its control of “areas of life that we used to consider … not governmental.” Shapiro points to the silliness of “forc[ing] a Jewish printer to produce anti-Semitic flyers.” It follows, he argues, that reducing government would reduce conflicts.

But no one is shrinking government anytime soon. In fact, as Gans and Holly Hollman both point out, government is the protector of many religious minorities.

For his part, Gans wants to resolve questions over birth control and bakers with rights talk. He contends that allowing Hobby Lobby’s owners not to pay for emergency contraceptives that they believe end a human life authorizes “one party to impose their religious beliefs on another and extinguish their legal rights.” And so with the baker. Allowing a baker not to actively participate in a wedding she cannot assist with for religious reasons produces, he argues, “[t]he sting of prejudice from discrimination.” Gans invokes the specter of “a storeowner who claims that his religion commands racial discrimination” to say, in effect, “no exceptions allowed.”

Influential voices in America make the same mistake: One person’s rights, they say, come at another’s expense. Last year, the U.S. Civil Rights Commission said religious exemptions allow groups to “use the pretext of religious doctrines to discriminate.” Seventy-five religious leaders responded: all LGBT nondiscrimination laws, “including those narrowly crafted, threaten fundamental freedoms, and any ostensible protections for religious liberty, appended to such laws are inherently inadequate and unstable.”

There are two problems with both accounts. First, neither recognizes that we all have to live together in the same space.

Second, continual litigation of these questions in the courts cannot tell us how to live together with dignity and respect. Even if the Supreme Court accepts the Masterpiece Cake Shop case knocking at its door, the Court is hamstrung in the answers it can give: the cake shop wins or the cake shop loses. The Court cannot refashion Colorado law so that a baker can live with integrity, while all couples are treated with dignity in the public square. In other words, constitutional decisions produce win-lose answers, not win-win results.

And don’t count on President Trump to end these clashes. The federal government cannot resolve the baker vs. couple question. Wedding vendors have been penalized under state and local laws. Title II, the federal public accommodations law, does not protect Americans from sex-based discrimination; it cannot be extended by agency decision to include sexual orientation or gender identity, as has happened with Title VII and Title IX.

Last week’s Executive Order on religious liberty did little more than end the “long ordeal” for the Little Sisters of the Poor, who asked to step aside entirely from the ACA’s contraceptive mandate. But neither Trump nor the EO addressed how Little Sisters’ employees will now fare. A draft EO from January 2017 suggested that the Sisters would be treated like the bishops—that is, like churches whose employees do not receive contraceptives under the ACA, from their employer or anyone else. Those employees get nothing. It remains to be seen whether Little Sisters’ employees will be boxed out of contraceptive coverage, too. (To be fair, churches are receiving the same treatment as Exxon, Visa, Pepsi, and other grandfathered employers.)

Focus on Solutions, Not Conflict

Meaningful solutions come from people of goodwill rolling up their sleeves and doing the hard work of crafting an approach that gives each of us the freedom to live and function in a society where others do not share our values.

It is easy to focus on conflicts over the Mandate and LGBT rights and overlook the lessons both have taught us for living together. In the Mandate context, President Obama treated with respect the concern voiced by religious universities and other nonprofits that they could not shoulder the new legal burden asked of them. He did not dismiss the concerns out-of-hand or force religious groups to violate their faith. Instead, he crafted an accommodation that gave contraceptives to women “free of charge, without co-pays and without hassles,” but shifted the duty elsewhere to pay for those valuable benefits.

In the LGBT rights context, Utah, the second most religious state in America, gave more rights to the full LGBT community than New York expressly gave that community. It did so by assuring religious groups and believers that gay rights would not wash out the faith character of faith communities. It drew careful statutory lines that permitted both communities to be who they are. Months before Kim Davis loudly proclaimed her religious conscience prevented her office from serving Kentucky’s citizens, Utah devised a new mechanism to guarantee seamless access to marriage for everyone—gay, straight, Black or White.  No one was turned aside or humiliated, no one was forced from their jobs for their religious convictions. That careful balancing of interests comes from legislatures, not courts.

Both sides really have no choice other than to engage in the hard project of living together.

As this figure shows, gay couples can marry everywhere in the United States, but in 31 states, they cannot be assured of having a rehearsal dinner at their favorite restaurant. 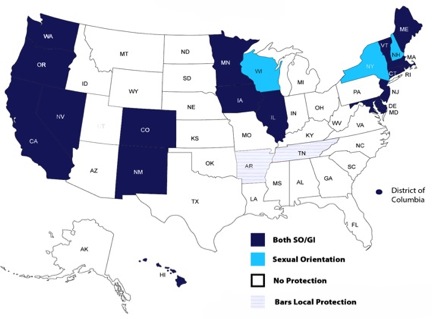 To be clear, bathroom-of-one’s-birth bills are not religious liberty protections, as Professor Douglas Laycock notes. As North Carolina’s own experts emphasized, “transgender individuals are not the source of [any] threat.” The behavior of rapists and child molesters is the issue. However, magnifying fears has become the tactic of choice to oppose all nondiscrimination protections for LGBT people, whether in public accommodations, hiring, or housing.

More and more media attention is consumed by wedding photographers, bakers, and florists being penalized or litigated out of existence, making possible compromise seem farther out of reach. 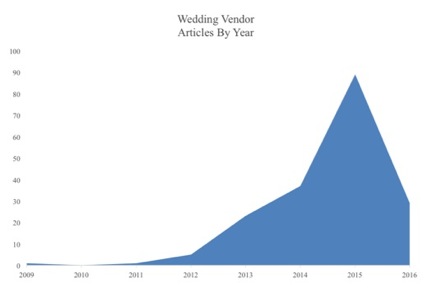 Overlooked is the fact that the crushing outcomes visited upon wedding service providers result from laws written without marriage in mind. Indeed, the relevant laws all pre-date marriage equality. 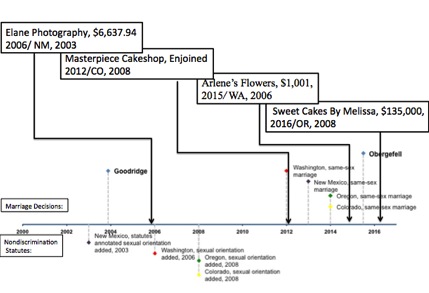 These dated laws treat every act as if the owner said “get the hell out of my business.” But it does not need to be this way. We can write laws that treat all customers with respect, while keeping small religious wedding vendors in business.

Everyone has a vested interest in finding such solutions.

Still, many who care deeply about religious liberty fear that protecting LGBT people from discrimination means religious people necessarily lose. Utah shows otherwise. It has more religious liberty protections around marriage than any other state—it accomplished that by giving rights, not blocking them.

As important, firing people for being gay is unjust, and protecting our neighbors from unjust treatment is a shared religious value. Libertarians who read this Journal surely believe that all Americans should be able to compete in the marketplace based on their merit—to support their families and have a chance at the good life. That, after all, is the meaning of the American dream.

If not these reasons, then self-interest should make religious communities take affirmative steps to protect the rights of others. The fight-tooth-and-nail approach simply does not work.

Let’s review the track record: stand-alone measures giving religious believers an unfettered right to affirm views of sexuality blessed by Mississippi are enjoined; a stand-alone, inartful religious conscience bill sparked boycotts and was vetoed, in Georgia. North Carolina’s bathroom law was an unmitigated disaster for the state, costing $3.7 Billion; it was repealed. And state Religious Freedom Restoration Acts or RFRAs, misunderstood by religious believers “as needed to stave off gay rights,” have become toxic and untenable, as Arizona and Indiana show. 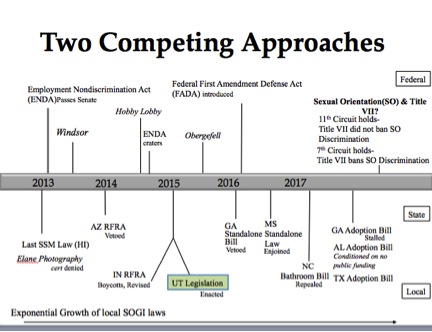 It is a fairytale to think doing nothing will suffice. Sixty percent of the nation lives under a state or municipal law protecting the LGBT community—often without nuanced consideration for houses of worship or the needs of faith communities.

It is time to put the two Americas to rest and start living as one people.