As a development economist, the biggest puzzle I face is “why don’t all countries in the world get to high A?”

I’ll explain what I mean.

Economists often characterize the total labor productivity of an economy (output per work hour) with an equation that describes output as a product of the “capitals” that are deployed (both physical capital like buildings, trucks, lathes, generators and human capital like knowledge, skills, abilities that people have) and then that function of capitals is multiplied by A, which is “total factor productivity” to express how effective/efficient those capitals are in producing output.

One easy way to think about the process of poorer countries getting more productive is that A represents codifiable technical knowledge—like how to build an internal combustion engine or how to design a factory to produce cotton textiles—and this technical knowledge is a “public good” that is non-rival and non-excludable. In this model A diffuses from high-A places to places that are initially low-A. This simple set-up produces an optimistic story: A (technical knowledge) converges across places, raises the productivity (and hence returns) to factors in poor places, and therefore people invest in factors (using domestic and foreign savings) and, over time, at a pace determined by the feasible pace of accumulating factors, poor countries become rich.

But by about the year 2000 it was clear this happy story of convergence mostly was not happening. Per capita incomes between rich countries and most poor countries did not converge (in the table below there was substantially higher growth in per capita incomes in developing regions than in the richer industrial countries only in East Asia and China). Moreover, what is really striking is that the lack of convergence is mostly not due to the inability of countries to mobilize savings and make investments in physical and human capital, but rather because A itself was diverging, or at least failing to converge. Table 1 is adopted from standard calculations of the decomposition of economic growth into factor accumulation and A (TFP) of Barry Bosworth and Susan Collins (2003, Table 1). None of the five regions (excluding China) had higher rates of TFP growth than the industrial countries. Moreover, Gordon (2016) claims USA TFP was 1.9 percent per annum in the fifty year period from 1920 to 1970 (in which it was already the leading economy) and none of the developing country regions achieved even half of that in the forty years 1960 to 2000. Comin and Mesteiri (2018) confirm that “intensity of use” of known technologies “accounts for the divergence during the twentieth century. 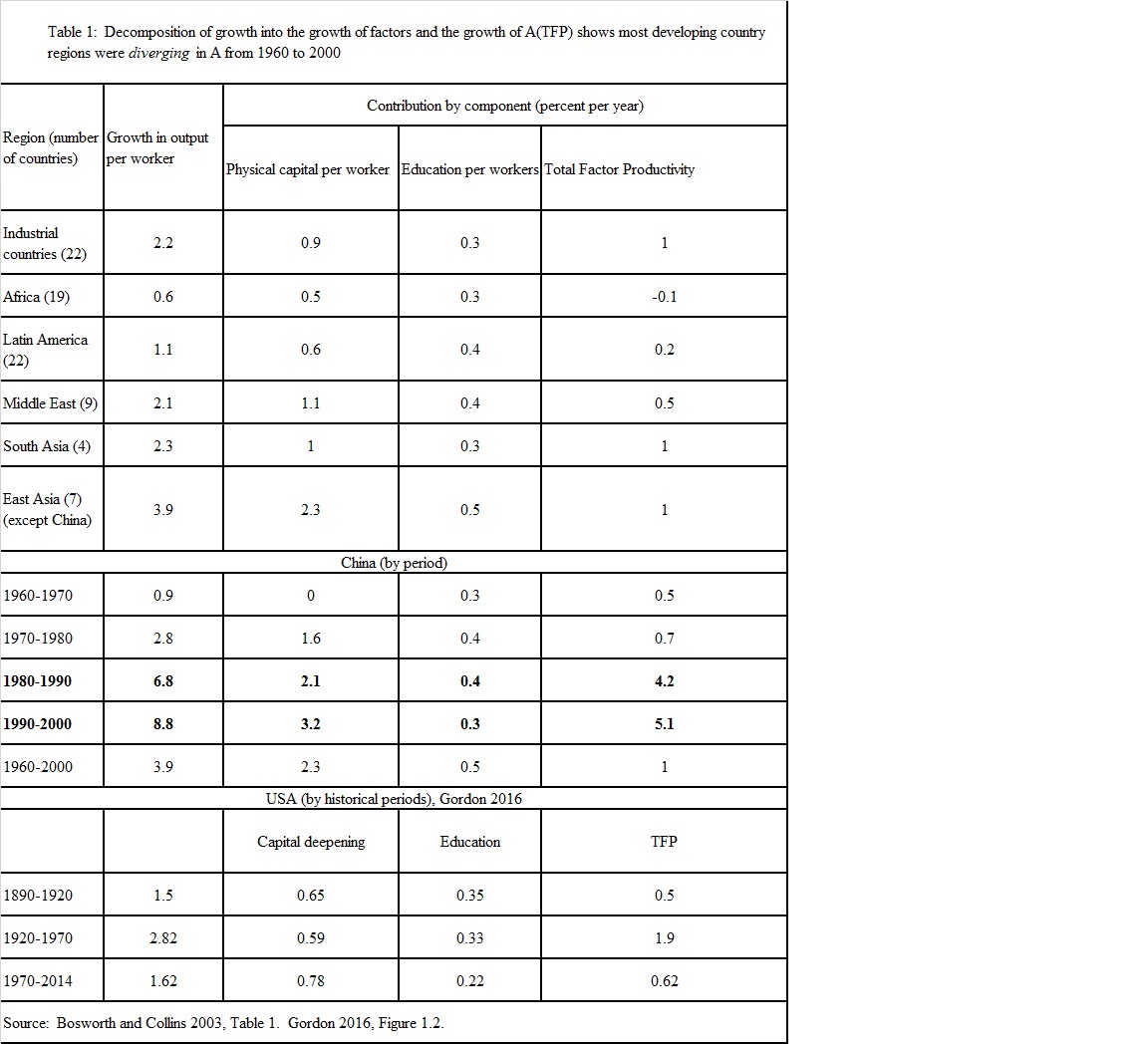 It is worth uncovering why this lack of convergence of A was so weird and why it set development economics off in completely different directions (and how that ended up with ideas like charter cities and special economic zones).

When development economics was becoming a field in the 1950s and 1960s it seemed obvious that (a) a large part of sustained economic growth since 1870 in the leading countries was “technical progress” in the sense of the expanded science and technology based knowledge embedded in new organizational practices and therefore (b) there were “advantages to backwardness” as it just had to be easier to adopt known ideas and practices than develop new ones from scratch, which Gordon (2016) argues is true. The rapid progress of Russia and Japan based on aggressively acquiring known technologies appeared to vindicate this view.

The acceptance of the finding that it was not primarily differences in factor accumulation that drove growth rates, and that A did not diffuse in ways that led to convergence, led to a series of papers and works that claimed “institutions rule.” Rodrik, Subramanian, and Trebbi (2004) actually used that title, but this was the rough implication of papers by many major economists around this period: Easterly and Levine (2002), Hall and Jones (1999), Acemoglu, Johnson and Robinson (2001), and of course Douglas North. The problematic nature of the “institutions rule” viewpoint was that none of these works tended to specify a model of the evolution of “institutions” and, as opposed to the optimism that A as knowledge would “naturally” diffuse across countries, there was a pretty decided pessimism that “institutions” were something that could and did remain the same over very long periods. It was easy to believe that since “institutions” were (or were sustained by) “norms” that there could exist low-level equilibrium traps—situations in which potential positive shocks or reform efforts would not be enough to escape the existing counter-productive norms.

I think this is the context in which the idea of charter cities came onto the development agenda as an intellectual last resort. If A diffused and growth was limited by available finance, work on finance. If the adoption of A was limited by “bad policies,” then work on getting rid of bad policies. If “institutions” constrained the improvement of A, then, if there was a feasible path to improved institutions, work on improving institutions. But what if none of that was true? What if the constraint to high productivity in a given space/territory was poor “institutions,” and what if these were caught in a persistent low level trap such that known and feasible improvement paths were not available? Then what one needs is a “big shock” to reset norms and create—at least in the limited space of a city, or province, or just a “special economic zone”—growth-promoting institutions.

But being a last resort just makes something potentially the least bad idea, and not a good idea. In the 1984 Ghostbusters movie they decide to cross the streams, in spite of the obvious risks of total protonic reversal, not because it was a good idea, but because it was a last resort, and all was lost to the Stay-Puff Marshmallow Man if they didn’t, so even a slim chance of success from crossing the beams was the best available option. Even if eliminating the last resort leads to full on pessimism, there are three good arguments why a “charter cities” or “spreading zones” approach is unlikely to work.

First, it requires credibility of a sovereign commitment to autonomy and to not interfere with the operation of the new “institutions” created by the charter city/zone. That credibility either comes because the existing sovereign government can make credible commitments or it can’t. If it can, then why are its “institutions” so messed up that it cannot fix them and needs an end-run? If it cannot, then it needs , as Romer argues, some other sovereign guarantor of the credibility of its commitment. But this requires that one sovereign (e.g. Honduras) cede sovereignty over a significant part of its existing territory to another sovereign (e.g. Canada). Now matter how instrumentally attractive this may be, and even in the best circumstances—unlike, say, ceding sovereignty to a Korean private company—the political optics of this are very bad.

Second, a key question is “how big/frequent/common is the political space in which the approach will work?” That is, across all configurations of the interests and “political settlements” of states, and across the capabilities the state can deploy, how frequent will it be that a state will have both the interest and the wherewithal to bring about a successful charter city (or other dynamic zone-like arrangement), but not have the interest and wherewithal to otherwise undertake less “last resort” successful reforms? After all, China both had the preceding successes in export oriented industrialization—Japan, Korea, Taiwan at a minimum—to learn from, and had the commitment, power, control, legitimacy, and capability to engage in deliberative experimentation to promote a new growth strategy. I suspect there are many states that are too weak to create a credible charter city in the first place (e.g. South Sudan) and many states in which the “deals”-based capitalism they are engaged in provides them with no political or economic incentives to do true arms-length charters. These stand in contrast to setting aside opportunities for insiders, as happened in Tunisia under Ben Ali, as well as many other states capable of pursuing rapid growth without the charter approach, like Indonesia under Soeharto, or Vietnam.

Third, my Harvard Kennedy School colleague Ricardo Hausmann has been doing very interesting work on why A has not diffused, and his “capabilities and complexity” approach suggests very different answers than the standard aggregate neo-classical production function. His model is that each product requires a recipe of inputs, and that more complex products are defined by needing not more of a standard aggregate input, like capital, but by many more inputs. His argument is that high productivity places are those that can bring together the longer and longer lists of capabilities needed for complex production. This therefore draws a distinction between the creation of special-purpose economic zones to facilitate the production of a very specific item (e.g. a zone for producing athletic shoes) and the creation of a large space, like a city, that can reap the economies of agglomeration. So a city can be a zone, but vice versa is unlikely. And this also reveals that the “seasteader” idea isn’t really a development agenda at all.

If China’s success since 1978 critically depends on the “zone” approach that was last successfully implemented 40 years ago, and that no one has replicated other than Dubai—which was essentially a real estate venture, not an approach to development—then these arguments get powerful support.

In sum, a charter city approach to developing growth-promoting institutions clearly can work, I would like it to work, but I think the reasoning that leads to such a quirky solution is more a reductio ad absurdum than a call to action.