Jay Bhattacharya and Jonathan Ketcham have seconded Michael’s post opposing a single payer plan for the United States. Unfortunately, they’ve done it by defending the performance of the U.S. private system relative to systems in other countries and by defending the performance of the private sector of the U.S. health care system in setting prices—arguments that have no validity at all.

With respect to the relative virtues of U.S. health care, they rely on remarkably dated reports to assert that other countries’ systems (lumped together as government-run, despite the myriad differences among them) are more expensive than they look or have worse outcomes. The Danzon study is from 1992; the Peltzman study is identified mainly from variation in the 1950s and 1960s.

The truly terrible overall performance of the U.S. system, in terms of both outcomes and costs, is evident in the two charts below, which use standard data from the OECD health database on purchasing power parity and inflation-adjusted spending and male life expectancy at age 40. The first one is from 1986 (the period examined in the Danzon study and the far end of variation in the Peltzman study).

We don’t stand out much relative to lots of other countries in that 1986 chart, so it’s at least arguable that we aren’t doing particularly badly. But look at the next chart, from 2016! Compare us to, say, Australia—a country that operates a public-option style health care system (or choose a different country if you’d prefer). Between 1986 and 2016, all these other countries saw vastly bigger improvements in life expectancy at 40 (beyond the age at which the effects of violence, fast cars, and a wild life are likely to manifest) than we did at vastly lower cost. And our relative results would be even worse if we looked at younger adults or women instead of middle-aged men (and no, it’s not obesity or even opioids—the deterioration in U.S. performance predates the opioid epidemic, and Australia is second only to us in the OECD in terms of obesity rates). Given the extraordinary difference in purchasing power–adjusted spending relative to these other countries, we ought to expect far better performance from the U.S. health care system than elsewhere—instead, our outcomes are far worse. 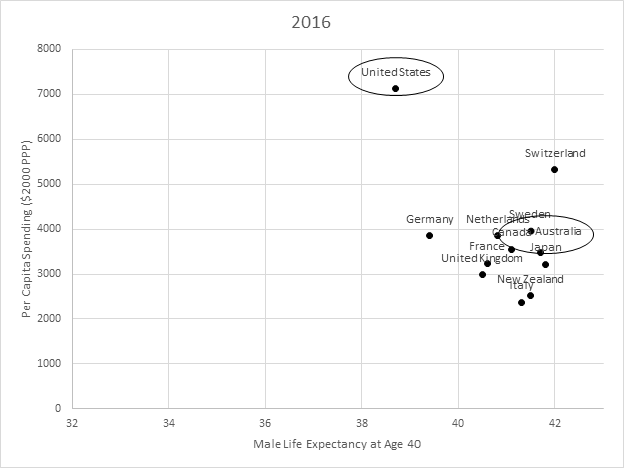 And it’s not just a distributional problem. Look at the recent analyses of life expectancy in Norway. Even the richest Americans do not do any better than the richest Norwegians—despite the fact that our health care system costs, on average, 70% more than their system does. It goes almost without saying that poor Norwegians do a lot better than do poor Americans.[1] Single payer may not be the right way to go—but not because systems with more government controls do worse than ours.

And what about the argument about government price setting and the absurdities of Medicare cardiologist pricing? Those claims, too, would be more convincing if there were much evidence of private plans doing price setting much better. But Medicare Advantage plans nearly always pay at traditional Medicare rates[2]—if they did not, all their clever payment arrangements and utilization review would not leave them competitive with traditional Medicare. In the commercial market, private insurers don’t have the leverage to pay at Medicare rates—but they use the same relative rate schedule as Medicare almost all the time[3]. In markets with little competition (and there are a lot of those), private payers do even worse. They not only pay high rates, but use payment systems that provide worse incentives than Medicare.[4] They also followed the same Medicare payment practices around cardiologists, although they were under no regulatory obligation to do so[5].

So I stand my ground. Single payer may not be the best health care system out there—but neither is the one we’ve got.