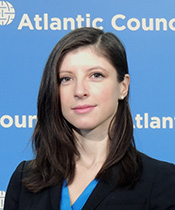 Dr. Alina Polyakova is the Deputy Director of the Dinu Patriciu Eurasia Center and Senior Fellow for the Future Europe Initiative at the Atlantic Council. Her research focuses on Disinformation, the European Union, European far-right parties, European identity, Nationalism, and Populism.

She is the author of The Dark Side of European Integration (2015), which examines the rise of far-right populism in Europe. Her work has appeared in the New York Times, Wall Street Journal, Foreign Affairs, Foreign Policy, The American Interest, Newsweek, and academic journals.

She holds a Ph.D. and M.A. in Sociology from the University of California, Berkeley, and a B.A. in Economics and Sociology with highest honors from Emory University.