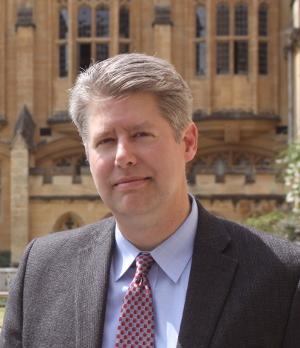 Andrew Rudalevige is the Thomas Brackett Reed Professor and chair of the Department of Government and Legal Studies at Bowdoin College. He is also a past president of the Presidents and Executive Politics section of the American Political Science Association. Rudalevige’s books include the forthcoming By Executive Order: Bureaucratic Managements and the Limits of Presidential Power; Managing the President’s Program: Presidential Leadership and Legislative Policy Formulation, which won the national Neustadt prize; The New Imperial Presidency: Renewing Presidential Power after Watergate; the co-authored textbook The Politics of the Presidency; and a series of edited volumes on the Bush and Obama presidencies. He writes frequently on executive power and national politics as a contributor to the Washington Post’s “The Monkey Cage” blog and is the creator of “Founding Principles,” a series of videos on American government and civics available on the Bowdoin College website and as a PBS LearningMedia resource. His current research centers on presidential management of the executive branch, including an institutional history of the Office of Management and Budget. In a former life he was a city councilor and state senate staffer in his native Massachusetts.

Response Essays: “The Ruling Passion of the Noblest Minds”
The Conversation: The Importance of Presidential Archives to the Citizens of a Republic