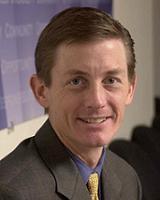 Bruce Reed is president of the Democratic Leadership Council (DLC), the national organization that launched the New Democratic movement.

Before returning to the DLC in January 2001, Reed served for eight years in the Clinton-Gore White House. As President Clinton’s chief domestic policy advisor and director of the Domestic Policy Council, he developed and oversaw the administration’s agenda on welfare reform, crime, education, tobacco, and other domestic issues. He helped write the landmark 1996 welfare reform law, create the 100,000 police program, and enact the President’s education agenda.

In 1992, Reed served as deputy campaign manager for policy of the Clinton-Gore campaign, supervising development of the domestic, economic, and foreign policy agenda. He served as policy director of the DLC from 1990 to 1991, when Clinton was DLC chairman. He also was founding editor of the DLC magazine, The New Democrat. From 1985 to 1989, he served as chief speechwriter for Senator Al Gore.

Reed currently serves as Editor in Chief of Blueprint, the DLC’s bimonthly journal, where he writes a regular column. His writing also has appeared in The New York Times, The Washington Post, The Wall Street Journal, USA Today, The Los Angeles Times, The New Republic, The Economist, and The Washington Monthly.

Reed, 44, is a native of Coeur d’Alene, Idaho, and a graduate of Princeton and Oxford, where he was a Rhodes Scholar.