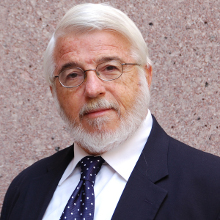 Fred L. Smith, Jr. is the Founder and Chairman of the Competitive Enterprise Institute, a free market public policy group established in 1984. He is also Director of CEI’s Center for Advancing Capitalism.

Mr. Smith is a frequent guest on national television and radio programs. He has appeared on CNN’s Crossfire, PBS’s News Hour with Jim Lehrer and Now with Bill Moyers, ABC’s 20/20 and This Week, among others. Smith’s popular writings have appeared in the Wall Street Journal, National Review, and the Washington Times, among many others. His academic articles have appeared publications such as the Harvard Journal of Law and Economics, CATO Journal, and Economic Affairs.

Mr. Smith holds a B.S. degree in Theoretical Mathematics and Political Science from Tulane University. He has also done graduate work in mathematics and applied mathematical economics at Harvard, SUNY at Buffalo, and the University of Pennsylvania.