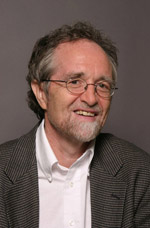 Frederick Turner is Founders Professor of Arts and Humanities at the University of Texas at Dallas. He formerly taught at the University of California at Santa Barbara, Kenyon College, and the University of Exeter. From 1978-82 he was editor of The Kenyon Review. He has published numerous books of literary criticism, aesthetics, theology, and a substantial body of original poetry.

Turner was born in Northamptonshire, England, in 1943. He spent part of his childhood in central Africa with his parents, the anthropologists Victor W. and Edith L. B. Turner. He was educated at the University of Oxford (1962-67), where he obtained the degrees of B.A., M.A., and B.Litt. (a terminal degree equivalent to the Ph.D.) in English Language and Literature. He was naturalized as a U.S. citizen in 1977. His website is available here.