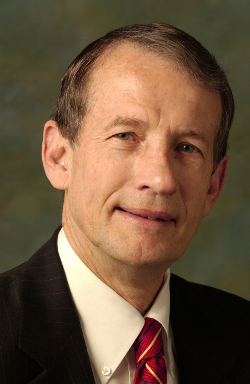 Gary Clyde Hufbauer is the Reginald Jones Senior Fellow at the Peterson Institute for International Economics. He previously held the Maurice Greenberg Chair and was Director of Studies at the Council on Foreign Relations, and prior to that he was the the Marcus Wallenberg Professor of International Finance Diplomacy at Georgetown University.

Among numerous publications, Hufbauer is coauthor most recently of of Bridging the Pacific: Toward Free Trade and Investment between China and the United States (2014) and Economic Normalization with Cuba: A Roadmap for US Policymakers (2014); as well as Economic Sanctions Reconsidered, 3rd edition (2007) and US-China Trade Disputes: Rising Tide, Rising Stakes (2006).

He has previously worked for the U.S. Treasury Department as deputy assistant secretary for international trade and investment policy and as director of the department’s international tax staff.