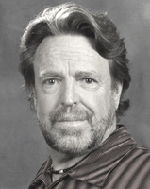 John Perry Barlow is a former Wyoming rancher, Grateful Dead lyricist, and co-founder and co-chair of the Electronic Frontier Foundation. He was the first to apply the term Cyberspace to the “place” it presently describes.

Barlow has written for a diversity of publications, including Communications of the ACM, Mondo 2000, the New York Times, and Time. He has been on the masthead of Wired magazine since it was founded. His piece on the future of copyright, “The Economy of Ideas” is taught in many law schools and his “Declaration of the Independence of Cyberspace” is posted on thousands of web sites.

In 1997, he was a Fellow at Harvard’s Institute of Politics and has been, since 1998, as a Berkman Fellow at the Harvard Law School.

He lives in Wyoming, New York, San Francisco, On the Road, and in Cyberspace. He has three teenaged daughters and aspires to be a good ancestor.

Response Essays: Reply to Lanier
The Conversation: I Still Believe