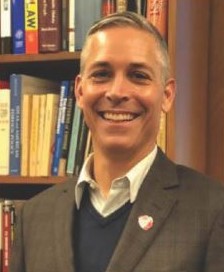 Justin Quinn Olmstead is currently Associate Professor of History and Director of History Education at the University of Central Oklahoma in Edmond, Oklahoma, with a Concurrent Appointment in the College of Arts and Humanities at Swansea University, Wales as Affiliate Faculty with responsibility for doctoral research supervision. He has edited two books, Reconsidering Peace and Patriotism during the First World War (Palgrave Macmillan, 2017), and Britain in the Islamic World: Imperial and Post-Imperial Connections (Palgrave Macmillan, 2017). Dr. Olmstead has also published The United States’ Entry into the First World War: The Role of British and German Diplomacy (Boydell & Brewer, 2018). He has contributed a chapter on the impact of military drones on foreign affairs in The Political Economy of Robots, (Palgrave Macmillan, 2018) edited by Dr. Ryan Kiggins, and a forthcoming chapter on the Churchill-Eden-Eisenhower relationship.

Currently Olmstead is the Assistant Editor for The Middle Ground Journal, Treasurer and Director of Membership for the international organization Britain and the World, and president elect of the Western Conference on British Studies, as well as being active in a number of other professional organizations. Dr. Olmstead has recently been appointed a Senior Fellow at the Armed Services Institute in the Center for Military Life, Thomas University. His current research includes leadership, the diplomacy of alliances, economic warfare, and the evolution of protective security. He presents on television, podcasts, and at national and international conferences on the First World War, British history, and Diplomacy, including invited lectures at The National Archives of the UK and the Institute for Historical Research, London. Dr. Olmstead gained his Ph.D. from the University of Sheffield, England and is a Fellow of the Royal Historical Society.

Response Essays: The Importance of U.S. Economic and Foreign Policy in the First World War and Beyond
The Conversation: Actions Speak Louder than Quotes