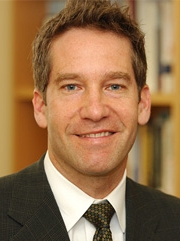 Kal Raustiala teaches courses in international law and international relations. He holds a joint appointment, as a professor, between the UCLA Law School and the UCLA International Institute, where he teaches in the Program on Global Studies, a multidisciplinary undergraduate program on globalization. In December 2006, he was appointed director of the UCLA Ronald W. Burkle Center for International Relations. The Burkle Center is UCLA’s primary academic unit that fosters interdisciplinary research and policy-oriented teaching on the role of the United States in global cooperation and conflict, and military, political, social and economic affairs.

In addition to UCLA, Professor Raustiala has been a visiting professor at Harvard Law School, Columbia Law School, the Princeton Politics Department, and the University of Chicago Law School. He was a fellow in the Foreign Policy Studies Program at The Brookings Institution, Washington, D.C., a Peccei Scholar at the International Institute for Applied Systems in Vienna, Austria, and a fellow in the Program on Law and Public Affairs at the Woodrow Wilson School at Princeton. He is a member of the American Society of International Law and the Council on Foreign Relations and has served as a consultant on legal matters to numerous international organizations.

Professor Raustiala’s recent publications include “The Evolution of Territoriality: International Relations and American Law,” in Miles Kahler and Barbara Walter, eds, Territoriality and Conflict in an Era of Globalization (Cambridge Univ. Press, 2006); and “The Piracy Paradox: Innovation and Intellectual Property in Fashion Design” (with Chris Sprigman), in the Virginia Law Review (December 2006). His article “Form and Substance in International Agreements”, American Journal of International Law (July 2005), won the 2005 Francis Deak Prize from the American Society of International Law.

June 2007 : How Global Should Government Be?