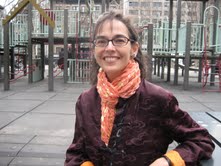 Lenore Skenazy is “America’s Worst Mom.” The New York City columnist got that title after letting her 9-year-old son take the subway alone. In response to the media blowback, she wrote the book and blog Free-Range Kids, which launched the anti-helicopter parenting movement. Her belief that our kids are safer and smarter than our culture gives them credit for has landed her on talk shows from Dr. Phil to The View. She has lectured everywhere from Microsoft Headquarters to the Sydney Opera House’s “Festival of Dangerous Ideas,” and written for everyone from The Wall Street Journal to Mad Magazine. As host of World’s Worst Mom, a reality TV show airing on Discovery/TLC International, she helps overprotective parents loosen the reins.

A graduate of Yale and Columbia, she lives in New York City with her husband and two sons, who are half Free-Range, half Facebook addicts.