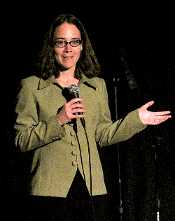 Marcy Wheeler is an independent journalist. She specializes in civil liberties, technology, and national security. She has been associated with numerous outlets, including Daily Kos, The Intercept, The Huffington Post, and FireDogLake. She has reported on subjects including the trial of I. Lewis “Scooter” Libby in conjunction with the outing of CIA operative Valerie Plame. She is the author of Anatomy of Deceit: How the Bush Administration Used the Media to Sell the Iraq War and Out a Spy.

More recently, she has provided detailed analysis of secret NSA documents made public by Edward Snowden, offering insight about both their meaning and possible public policy responses to them, at her blog Emptywheel.

Wheeler holds a BA from Amherst College and a Ph.D. from the University of Michigan.

Response Essays: The Drama Ahead: Google versus America
The Conversation: The Single Branch Theory of Oversight