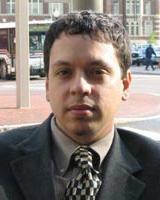 Markos “Kos” Moulitsas is the founder and proprietor of Daily Kos, the most popular political weblog on the Internet.

Born in Chicago, Moulitsas was raised in El Salvador and lived there until civil war forced his family back to the States in 1980.

Immediately after high school, at the age of 17, Moulitsas enrolled in the U.S. Army, and served in Lawton, Oklahoma and Bamberg, Germany. He was a 13P — an MLRS/Lance Fire Direction Specialist (artillery), and served between 1989-92.

Moulitsas subsequently received two bachelor degrees from Northern Illinois University (with majors in Philosophy, Political Science and Journalism) and a J.D. from Boston University School of Law (emphasis in trial litigation). He moved to the San Francisco Bay Area to work in the tech industry, where he remains today.

Moulitsas started Daily Kos —a weblog focusing on progressive, liberal, and Democratic Party politics—on May 26, 2002 (named after his Army nickname, rhymes with “dose”), and continues to maintain the site from Berkeley, California. In its first year, Daily Kos attracted over 1.6 million unique visits and about 3 million pageviews. Nowadays, it receives about 20 million unique visits per month.

Moulitsas’s heroes are Archbishop Oscar Arnulfo Romero, Cesar Chavez, and, above all others, his father. Moulitsas currently resides in Berkeley, California, with his wife and son.