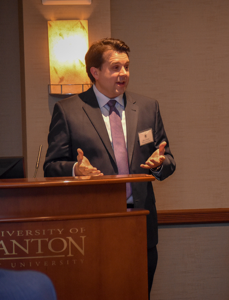 Meyer has a general interest in the history of philosophy and specializes in ancient Greek and nineteenth-century German philosophy. Most of his research to date has been on the thought of Friedrich Nietzsche. He published his first book, Reading Nietzsche Through the Ancients: An Analysis of Becoming, Perspectivism, and the Principle of Non-Contradiction, with the Berlin-based publisher Walter de Gruyter in 2014. His two most recent books, both published in 2019, are Nietzsche’s Free-Spirit Works: A Dialectical Reading (Cambridge University Press) and Nietzsche’s Metaphilosophy: The Nature, Method and Aims of Philosophy (ed. with Paul Loeb) (Cambridge University Press). He is currently working on a new book project, The Routledge Guidebook to Nietzsche’s Thus Spoke Zarathustra (Routledge). He serves as the Director of the Pre-Law Advisory Program and Legal Studies Concentration, and he is the faculty director of the new Gail and Francis Slattery Center for Humanities at The University of Scranton.

August 2021 : Liberalism and the Free Spirit

Response Essays: Are Free Spirits Too Free for the Liberal Order?
The Conversation: Will a Free Spirit Be a Liberal Spirit?