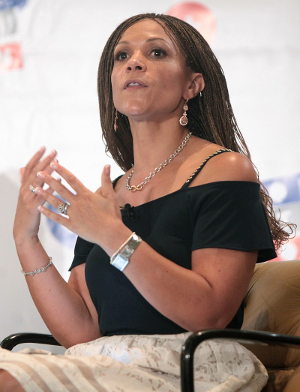 Melissa Harris-Perry is the Maya Angelou Presidential Chair at Wake Forest University, in the department of politics. She is an Editor-at-Large at Elle magazine. She hosted the television show “Melissa Harris-Perry” from 2012-2016 on weekend mornings on MSNBC.

She is the author of the award-winning Barbershops, Bibles, and BET: Everyday Talk and Black Political Thought, and Sister Citizen: Shame, Stereotypes, and Black Women in America.

Harris-Perry received her B.A. degree in English from Wake Forest University and her Ph.D. degree in political science from Duke University. She also studied theology at Union Theological Seminary in New York. Harris-Perry previously served on the faculty of the University of Chicago, Princeton University, and Tulane University.