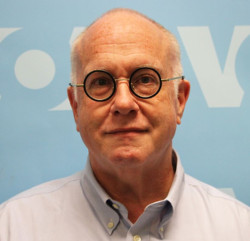 Mike Godwin is an attorney and author. A former distinguished senior fellow with the R Street Institute, his work focuses on the areas of patent and copyright reform, surveillance reform, technology policy, freedom of expression and global internet policy.

He has served as a senior policy advisor at Internews, advising the organization’s public-policy partners in developing and transitional democracies, as part of the Global Internet Policy Project. He has also served as general counsel for the California-based Wikimedia Foundation, which operates Wikipedia and other collaborative projects.

Godwin received his undergraduate and law degrees at the University of Texas at Austin where, while a law student, he served as a reporter and later editor-in-chief of The Daily Texan. Godwin began his legal career as the first staff counsel for the Electronic Frontier Foundation. His continuing career as an Internet-law thought leader has included a policy fellowship at the Center for Democracy and Technology and a research fellowship at Yale Law School. He has been a contributing editor at Reason magazine since 1994 and is the originator of the widely cited “Godwin’s Law of Nazi Analogies,” which in 2012 was added to the Oxford English Dictionary.

Response Essays: Tolerance and the Fate of Democracies
The Conversation: The Fourteenth Amendment’s Section 3 and the Defense of American Democracy