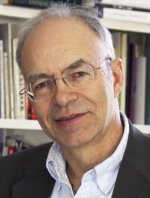 Peter Singer is Ira W. DeCamp Professor of Bioethics in the University Center for Human Values at Princeton University and Laureate Professor, University of Melbourne, Centre for Applied Philosophy and Public Ethics.

Singer first became well-known internationally after the publication of Animal Liberation. His other books include: Democracy and Disobedience; Practical Ethics; The Expanding Circle; Marx; Hegel; Animal Factories (with Jim Mason); The Reproduction Revolution (with Deane Wells), Should the Baby Live? (with Helga Kuhse), How Are We to Live?, Rethinking Life and Death, Ethics into Action: Henry Spira and the Animal Rights Movement, A Darwinian Left, One World: Ethics of Globalization, Pushing Time Away, and, most recently, The President of Good and Evil: the Ethics of George W. Bush. He also co-authored The Greens with Bob Brown, founder of the Australian Greens. His works have appeared in 20 languages. He is the author of the major article on “Ethics” in the current edition of the Encylopedia Britannica. Two collections of his writings have been published: Writings on an Ethical Life, which he edited, and Unsanctifying Human Life, edited by Helga Kuhse.

Peter Singer was the founding President of the International Association of Bioethics, and with Helga Kuhse, founding co-editor of the journal Bioethics. Outside academic life, is the co-founder, and President, of The Great Ape Project, an international effort to obtain basic rights for chimpanzees, gorillas and orangutans. He is also President of Animal Rights International.