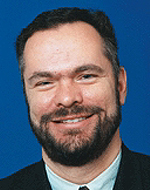 Reuel Marc Gerecht is a resident fellow at the American Enterprise Institute. An expert in Middle East affairs, he has focused since 9/11 on Iran, Iraq, and Afghanistan, as well as on terrorism and intelligence.

He is the author of Know Thine Enemy: A Spy’s Journey into Revolutionary Iran (Farrar, Straus & Giroux, 1997) and The Islamic Paradox: Shiite Clerics, Sunni Fundamentalists, and the Coming of Arab Democracy (AEI Press, 2004). He is a contributing editor for The Weekly Standard and a correspondent for The Atlantic Monthly, as well as a frequent contributor to the Wall Street Journal, the New York Times, and other publications.

Mr. Gerecht formerly held positions as the director of the Middle East Initiative for the Project for the New American Century and as a Middle Eastern specialist in the Central Intelligence Agency. He holds an M.A. in Islamic history from Princeton University.