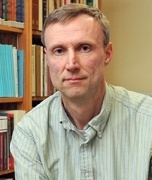 Scott Sumner is professor of economics at Bentley University. His main area of research has been in the field of monetary economics, particularly the role of the gold standard in the Great Depression. Sumner had begun research on the relationship between cultural values and neoliberal reforms, until getting pulled back into monetary economics by the current crisis. His other areas of interest include macroeconomics, monetary theory and policy, and history of economic thought. Sumner’s work has appeared in the Journal of Political Economy, the Journal of Money, Credit and Banking, and the Bulletin of Economic Research, and the Cato Journal. Sumner earned his PhD in economics at the University of Chicago. He is a noted proponent of the idea of nominal GDP targeting, a central banking policy that would aim for a constant rate of inflationary plus real GDP growth. Sumner blogs at The Money Illusion.