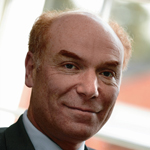 Terence Kealey was born in 1952, and he trained initially in medicine (under the British system, students may enter medical school at the age of 18) at St Bartholomew’s Hospital Medical School of the University of London. After practicing clinical medicine for a short time, he decided to follow a career in biochemical research, and he obtained his doctorate from Oxford University. Most of his subsequent career he spent lecturing in clinical biochemistry at the University of Cambridge, but in 2001 he moved to the University of Buckingham (the only university in Britain not funded by the state) as Vice-Chancellor (aka president).

His research as a clinical biochemist focused on the cell biology of human skin diseases but – after Oxford University insulted Margaret Thatcher in 1985 by first offering and then withdrawing the offer of an honorary degree – he developed an interest in the sociology and economics of science. This latter interest he expressed in two books, first The Economic Laws of Scientific Research (1996) which he updated in 2008 as Sex, Science and Profits: How People Evolved to Make Money.

Lead Essay: The Case against Public Science
The Conversation: Replies on Public Goods and Crowding Out