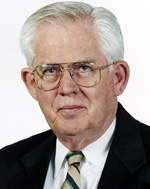 William A. Niskanen has been chairman of the Cato Institute since 1985, following service as a member and acting chairman of President Reagan’s Council of Economic Advisers. Niskanen has served as director of economics at the Ford Motor Company, professor of economics at the University of California at Berkeley and Los Angeles, assistant director of the federal Office of Management and Budget, a defense analyst at the Rand Corporation, the director of special studies in the Office of the Secretary of Defense, and the director of the Program Analysis division at the Institute of Defense Analysis. He has written on many public policy issues including corporate governance, defense, federal budget policy, regulation, Social Security, taxes, and trade. Niskanen’s 1971 book Bureaucracy and Representative Government is considered a classic, and his 1994 book Bureaucracy and Public Economics puts forward the first formal economic theory of the behavior of bureaucracies. His most recent book is After Enron: the Lessons for Public Policy