How the Courts Got Dumbed Down

“Justice Rehnquist might have made a brilliant 19th-century chief justice, but brilliance of judicial intellect in the service of racism and injustice is no virtue in our times.”

“Nowadays a certain minimum competence is demanded (and [John] Roberts did receive some grudging respect for his outstanding credentials), but above that, contenders get little credit for being abler legal analysts than their competitors, and sometimes negative credit: the fate of Robert Bork, whose intellectual distinction was held against him as making him more dangerous.”

Judges exert a large and growing role in our lives.  The cases they decide cover everything that we do.  Can the government ban the sale or rental of violent video games to minors? Does proving discrimination against a few female employees working for Wal-Mart constitute proof that Wal-Mart discriminated against all its 1.3 million female employees?  Does the federal government have the power to determine who is a minister? Is carbon dioxide, part of the very air that we breathe out, a pollutant that the EPA can regulate? Can someone who brutally rapes a child receive the death penalty? Is the government able to use GPS devices to monitor citizens without securing a court order?  Who can get married to whom?  Can unions mandate that employees pay dues that go to political campaigns?

The list could go on.  Those are just a few of the countless issues handled by federal judges over the last half dozen years.

Judicial confirmations have become much more contentious over time.  Yet there has been little study of what personal characteristics make some judges less confirmable than others. Who are the nominees that make it through the confirmation process? Are they the brightest people who have the most detailed and sophisticated knowledge of the law? Are the most successful lower court judges also the most likely to get promoted to serve on higher courts?

Think that attending a top university and graduating at the top of the class is the key to your success? Not if you’re headed for a federal judgeship. In fact, today the most accomplished candidates are the most likely to be rejected. And this phenomenon has only gotten worse, with the quality of judges declining over the last four decades.

If you graduated from a top-10 law school and served on the law review, how do you fare?  As I present in my new book, “Dumbing Down the Courts,” graduating from a top-10 law school meant it took about 65 percent longer to get confirmed. Looking at all the nominations from the Carter through George W. Bush administrations also shows that students at top law schools who distinguished themselves further by getting clerkships on a circuit court and then the Supreme Court, confirmations took 158 percent longer.

Does this make any sense?  To understand why this may be happening, consider jury selection. A few years ago, Greg Mankiw, the chair of the Harvard University economics department, was called up for jury duty. After sitting around for most of the day waiting to be considered, Mankiw was finally brought up to the jury box, where he sat for only about five minutes before being kicked off the jury. As Mankiw later wrote on his blog, “The only information they had about me at the time was based on a brief questionnaire, which did not say much more than my name, address, and occupation.” This caused Mankiw to wonder: “Why does being a professor of economics at Harvard make one an undesirable juror in such a case?”

The answer is simple: A smart person who makes his living persuading others could end up successfully swaying fellow jurors. If lawyers on either side suspect that an intelligent potential juror is leaning against their side of the case, they use one of their peremptory challenges to remove him or her from the jury pool. They would rather have a less articulate juror, even if perhaps somewhat more biased.

The same reasoning goes for judges on a federal circuit court and even the Supreme Court. A smart, persuasive judge might convince other judges to change their votes on a case. Judges who can write powerfully worded decisions also are more likely to be cited more frequently in other judges’ decisions and to influence their decisions.

The president wants to nominate influential judges to successfully push the positions he values. His political opponents, however, naturally fear such judges—and, therefore, vehemently oppose their appointments.

When I originally started researching this topic, I thought that it was possible that both low- and high-quality nominees would face difficulty being confirmed. Senators may not want to let their opponents place the brightest lawyers as judges, yet weak nominees would also be rejected.  But I was wrong.  Actually, the less influential the judge, the easier it was for him to get confirmed.  A president’s political opponents do not waste effort stopping a nominee who is simply mediocre.

One nomination, President Bush’s selection of Harriet Miers in October 2005, shows how political opponents react when they think that a nominee is intellectually weak.  Bush said that he picked Miers over Fifth Circuit Court Judge Priscilla Owen in part because “[he] knew her better.”[1] Miers had worked closely with the president while first serving as his deputy chief of staff for policy and then as the White House counsel. They had also known each other in Texas. But she had no real paper trail on most controversial issues. Bush appears to have viewed her as a “Souter”-type nominee, a largely “stealth” candidate.[2]

The one rare issue where Miers had taken a firm public stand—support for a constitutional ban on abortion except to save a mother’s life—should have sent Democrats to the barricades. After all, abortion had become their signature issue during confirmation battles, and her opposition was clearer and stronger than that of other Republican nominees whom they had opposed.[3]  Yet Democratic opposition to her was quite “muted.”[4]  Even though Republicans understood that Bush and some prominent conservatives would vouch for her political views,[5]  it was Republicans who opposed her nomination, because they wanted a stronger, more influential candidate whose arguments might swing future Supreme Court decisions.

Attempts to block potentially influential nominees have increased over time.  It is reflected in two ways: a greater percentage of judges not confirmed as well as the lengthening of the confirmation process.

Confirmation rates for federal circuit court judges fell continually from Jimmy Carter through George W. Bush, dropping from 93 to 72 percent. Barack Obama’s 85 percent confirmation rate is the highest rate seen since the Reagan administration, and it is likely a result of the large Democratic majorities in the Senate that Obama has enjoyed (see Figure 1). 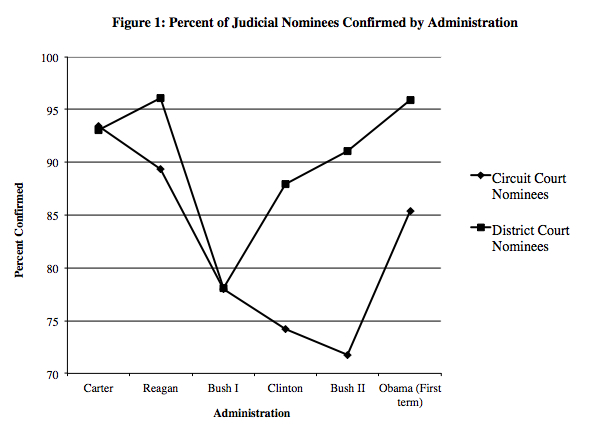 While the public understandably pays most attention to Supreme Court nominations, the nomination battles for circuit court judges have intensified even more dramatically. With more than 70,000 circuit court decisions each year compared to fewer than 100 cases heard by the Supreme Court, circuit court judges get the final word in virtually all federal judicial cases. For Ronald Reagan, it took an average of 68 days to get his 87 nominees confirmed. During George W. Bush’s administration (2001-2009), the average wait time increased dramatically, skyrocketing to 362 days. Obama’s nominees fared somewhat better, but still faced an average of 268 days during his first term.

Confirmations have gotten more contentious for two simple reasons.  First, the stakes have increased as the power of the federal judiciary has exploded. Since 1960, the number of federal circuit court cases has grown 12 times faster than U.S. population growth (see Figure 2). This explosion closely followed the proliferation of regulatory agencies in the 1960s and 1970s, from the Environmental Protection Agency to the Occupational Safety and Health Administration. 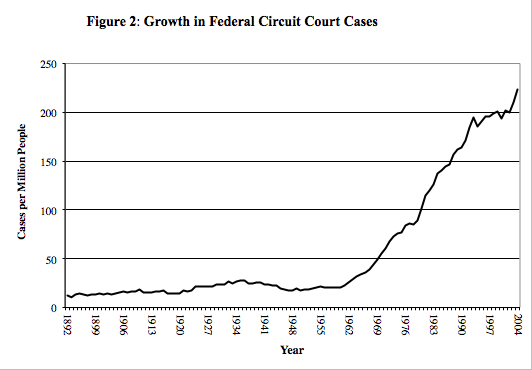 Second, judges feel less bound by the law than they used to.  It may be hard to believe today, but presidents used to actually appointment members of the Supreme Court and the Appeals Courts from the opposing party.  The notion was that since judges generally followed the law, not their own political preferences, with a few notable exceptions it really didn’t matter too much which political party a judge belonged.

Herbert Hoover’s appointment of Benjamin Cardozo to the Supreme Court in 1932 is such a case. Cardozo openly backed Hoover’s opponent in the 1928 presidential election, writing that Republicans represented “all the narrow-minded bigots, all the Jew haters, all those who would make of the United States an exclusively Protestant government.” But Hoover thought “that the Supreme Court should have a strong minority of the opposition’s party and that all appointments should be made from experienced jurists” and felt Cardozo was the smartest Democrat he could nominate.

Taken together, this explosion in the power and reach of federal judges and the increased willingness of judges to insert their political preferences into their judicial decisions have led to one clear result: who gets confirmed as a judge matters.  And as the importance of who gets nominated has increased, the confirmation battles have become more intense.

Not only does all this mean that presidents are increasingly failing to get their best and brightest judicial picks confirmed, but in order to avoid heated battles, presidents have also sometimes shied away from nominating the very top candidates.  Alas, since the chances of confirmation are even worse for the most potentially influential nominees, they have to be pragmatic.

The influence of confirmed federal judges can best be measured by how often other judges cite their opinions. Here the evidence of “dumbing down” is striking: A federal judge whose opinions were cited 20 percent more often took roughly a 60 percent longer to go through the confirmation process.

It is perfectly rational for each party to oppose the other party’s smartest nominees, but this comes at a cost. The law has now become so complex, in so many areas, that a smart judge—regardless of his or her political leanings—might be more equipped to avoid harmful errors when many lives or billions of dollars are at stake.

[3] The Washington Post article noted: “Supreme Court nominee Harriet Miers once pledged that she would ‘actively support’ a constitutional amendment banning abortions except to save a mother’s life, participate in antiabortion rallies, and try to block the flow of public money to clinics and organizations that help women obtain the procedure.” Amy Goldstein and Charles Babington, “Miers Once Vowed to Support Ban on Abortion,” Washington Post, October 19, 2005 (http://www.washingtonpost.com/wp- dyn/content/article/2005/10/18/AR2005101800715.html).

[5] Focus on the Family founder and president Dr. James Dobson, a strong advocate of banning abortions, assured conservatives that Harriet Miers could be trusted on abortion and other issues. Dobson told his radio show listeners: “When you know some of the things that I know, that I probably shouldn’t know, you will understand why I have said, with fear and trepidation, that I believe Harriet Miers will be a good justice.” Advocates of abortion “accused [Dobson] of having some sort of inside information from the Bush administration that led him to endorse Miers.” Steven Ertelt, “Dobson Discusses Harriet Miers Supreme Court Pick, Abortion Views,” LifeNews.com, October 12, 2005, http://www.lifenews.com/2005/10/12/nat-1688/.