Facts and Fables: A Long-Run Perspective on the Patent System

Patent grants have always been at the center of controversy, and the U.S. patent system is no exception. Today many critics of the patent system employ rhetoric reminiscent of Yeats’ poem about the first World War, implying that “things fall apart; the centre cannot hold;” and some even call for “mere anarchy” or the abolition of patents.[1] Eli Dourado’s lead essay similarly proposes significant reforms based on the specific hypothesis that the Court of Appeals for the Federal Circuit (CAFC) contributes to pervasive problems. It is impossible to directly prove or disprove that, while we have not attained Bethlehem, alternative routes would get us there faster. But economic historians are not deterred by the merely impossible, and I will draw on long-term patterns to suggest that the current experience is not anomalous. Patent and legal institutions are not perfect, but the news of a crisis and the need for a Second Coming have been much exaggerated.

The lead essay supposes that the current environment is overly favorable to, and legal institutions have been captured by, patent interests. Both theory and evidence would lead us to exercise caution before accepting such a claim. We cannot objectively gauge the attitudes of courts by parsing their legal decisions, for many reasons.[2] Further, “pro-patent” decisions that uphold patent rights are distinctly different from improper bias toward “patent interests.” Joseph Story, the most influential Supreme Court Justice in the realm of intellectual property law, stated that we need to remind ourselves that it is the U.S. Constitution itself that bestows secure property rights on patents.[3] The legal default is thus a presumption of strong protections for patented inventions, and the burden of proof is on anyone seeking to circumscribe or overturn those rights.

Dourado points an accusatory finger at the Federal Circuit, whose “misbehavior” in many dimensions has created significant deleterious outcomes. We are encouraged to infer from Figure 1 in his essay (which does not adjust for population or other legal and economic changes) that the introduction of a specialized patent court has caused the observed significant increase in patents granted in the past few decades. We can gain valuable insights from the historical experience and from disaggregation of these basic data, as in Figure 1 below. From a longer-term perspective, the patterns of patenting per capita for domestic residents today is not substantively different from the cyclical grants of the past.[4] The most dramatic change relates to the filing for patents in the United States by foreigners, which now exceeds grants to domestic residents. As such, clearly a substantive part of the explanation for post-1980 patterns lies well beyond the borders of the United States.[5]

Figure 1: Domestic and Total Patents Per Capita Filed in the United States, 1840-2013 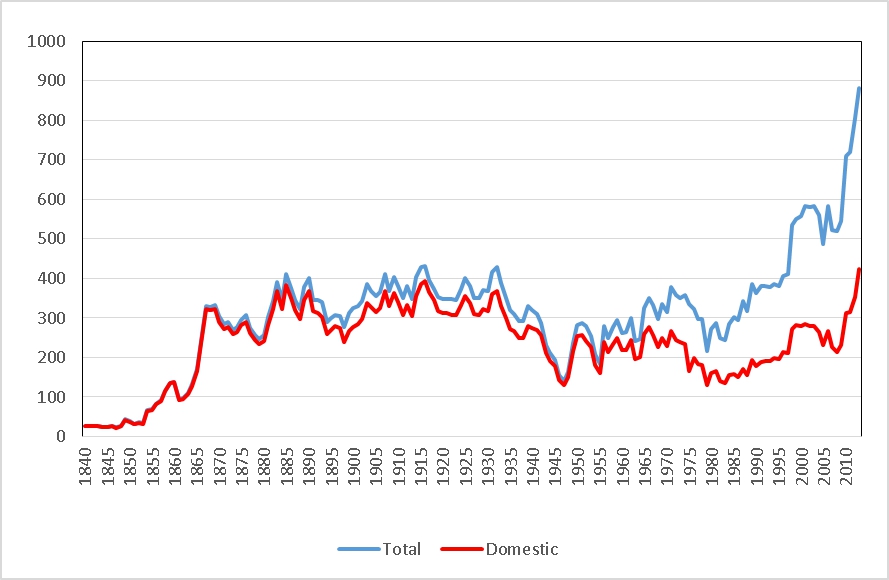 Source: U.S. Patent and Trademark Office; and U.S. Bureau of the Census

Tesla the Magician, Trolls, and Other Fables

The Federal Circuit, it is argued, has also misbehaved by expanding the subject matter of patents and allowing protection for software. I am not certain why the United States, one of the most creative countries in the world in the realm of information technology, should choose to follow the leadership of New Zealand (?!) in revoking property rights for software inventions. The legal boundaries of patent grants in disruptive technologies have always been difficult to delineate, and in the nineteenth century Joseph Story characterized them as “the metaphysics of the law.”[6] In that period, just as today, the subject-matter of patents filed necessarily had to change to incorporate economically important new discoveries, such as the application of the principles of electricity to innovations that dramatically increased productivity and social welfare – and litigation. To nineteenth-century observers, electrical innovations appeared magical, and patents on them were even more abstract and problematic than software might seem to us today. The opinion in Edison Electric Co. v. Westinghouse noted that “it is exceedingly hazardous for one not an expert to express an opinion on a question so wholly within the domain of scientific exposition… . It is difficult—impossible, perhaps—to describe what invention is.”[7] Congress, the courts, and the Patent Office nevertheless resisted the temptation to prohibit patents for electrical inventions. 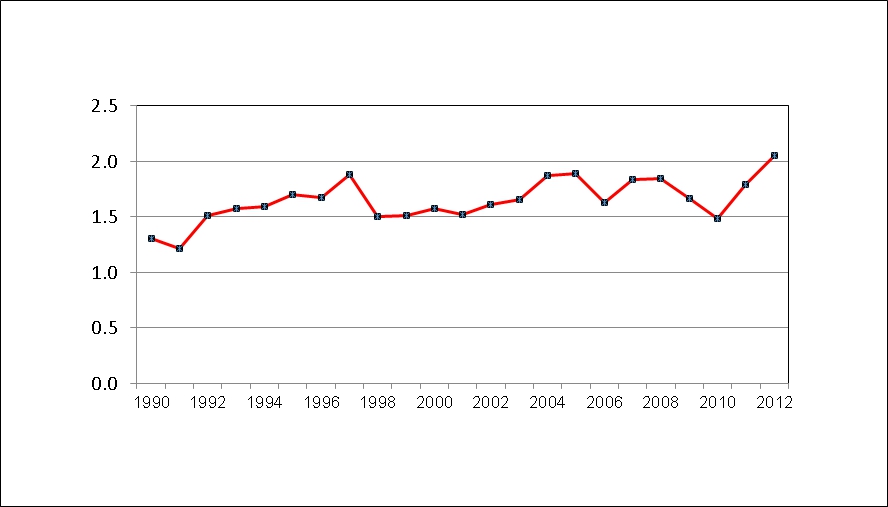 The lead essay suggests that the Federal Circuit is to be held responsible for an “explosion” in patent litigation.[8] Figure 2 illustrates the actual rate of litigation (relative to patent grants), which hardly seems to warrant the concern it has attracted, especially given the recent changes in legal rules that have contributed to an increase in the number of separate lawsuits filed. Moreover, the rate of litigation for copyright has risen faster than that of patents. This indicates a general increase in intellectual property concerns, rather than a patent-specific rationale. In the first century of the patent system rates of litigation were at times significantly higher than today, and growth was also more rapid in the transformative era that preceded the Second Industrial Revolution. The point here is that, if litigation at the present time is similar to the long-term norm, the primary causes are likely to lie beyond recent issues and institutions.

Information technology has transformed the world around us, and such markets are expanding, so it is not surprising if software and related innovations now account for a larger fraction of patents filed and litigated. Patent litigation is but one facet of the changes created by all disruptive technologies.  In the past, every major new discovery has led to a rapid increase in litigation, not just in the realm of patent law, but in contracts, torts, crime, and indeed all areas of the legal system. As Justice Cardozo noted, “the great inventions that embodied the power of steam and electricity, the railroad and the steamship, the telegraph and the telephone, have built up new customs and new law.”[9] Disputes about smartphones and software will similarly in the future give way to litigation about the Next New Thing.

The author calls for reforms to mitigate the negative consequences of “predatory litigation” by “patent trolls,” who “legally extort” large sums from “innocent parties.”  In less colorful terms, patents comprise property rights in invention that offer a legal right of exclusion and appropriation enforceable by the courts. Economic efficiency implies that property rights should be based on the nature of the patented invention, and not on the identity of the patentee. Proposals that policymakers should distinguish between patent trolls (however defined) and other patentholders essentially advocate that patent policy should be driven by moral judgments about who is deemed to be more deserving of protection. Even if “non-trolls” (hobbits?) were favored, other patent holders could obviously circumvent the restrictions, but at greater costs to the economic system. In short, limitations on the rights of any patent holder because of such arbitrary factors are incompatible with both market efficiency and the fundamental principles of the American patent system.

The patent controversy in the United States today is not significantly different from previous eras. It is worth noting that, in the past, populist clamor for congressional action to deal with “patent wars” and perceived excessive patent litigation was repeatedly ignored by legislators who wisely realized that the costs of such reforms would likely outweigh their alleged benefits. A longer-term perspective leads one to be much more cautious about lobbying for drastic reforms in a system that has functioned effectively for over two centuries.

[2] First, many disputes are between plaintiffs and defendants who both own patents, and litigants have many unquantifiable concerns beyond a win or loss. Further, the sample of appealed cases is unlikely to be representative of the total population of underlying disputes, both in cross-section and over time. We might expect that in the long-run outcomes would be independent of the biases of judges, and the overall legal system would tend towards more efficient decisions. For an historical discussion of such issues, see B. Zorina Khan, “Property Rights and Patent Litigation in Early Nineteenth-Century America,” Journal of Economic History, vol. 55 (1) 1995: 58-97.

[3] According to Story, property rights in patents were “sacred” and comprised the “dearest and most valuable rights which society acknowledges.” See ex parte Wood & Brundage, 22 US 603.

[4] After the Civil War, a burst of technological creativity was expressed in a rapid upswing in patenting and innovation, that was associated with the Second Industrial Revolution, which transformed the U.S. society and much of the world. And yes, we can infer some degree of causality between patenting and productivity, because almost all of the “great inventors” who created this new technological era were very concerned with protecting their ideas through patenting. Patents facilitated private appropriability, and were also associated with external benefits to other patentees and to innovators of unpatentable items. B. Zorina Khan, The Democratization of Invention: Patents and Copyrights in American Economic Development. NBER and Cambridge University Press (2005).

[5] It seems plausible that the rise in filing by foreign patentees is due primarily to factors originating in their own home countries, and to the continued profitability of U.S. markets, rather than to the minimal expected incremental value inherent in their estimations of changes in the attitudes in the Federal Circuit in judging their claims should one of their patents ever be litigated at the appellate level. In any event, more research is needed to understand why foreign patentees choose to significantly increase their presence in the supposedly broken American patent system.

[8] For more details on the historical perspective on patent litigation today, see B. Zorina Khan, “Trolls and Other Patent Inventions: Economic History and the Patent Controversy in the Twenty-First Century,” George Mason Law Review, vol. 21 (2014): 825-863.