Late last year, United Nations member Saudi Arabia gave citizenship to one of world’s most advanced autonomous robots, Sophia. It was a publicity stunt. Nonetheless, I applaud Saudi Arabia’s action under its ambitious Crown Prince Mohammed’s bin Salman—which I think is bold and helped force both the international and Arab communities to reckon with the thorny future of robot rights. Sophia, made by Hong Kong-based Hanson Robots, is no super advanced intelligence yet, but some experts think that if her intelligence keeps growing rapidly—and it likely will given near exponential growth of the microprocessor, increased investment in the AI sector, and the inevitability of quantum computing—she could be as smart as people in 10 or 20 years.

Of course, then, the Saudi Arabian stunt may backfire. Sophia may demand rights that Arab and even western countries are not willing to grant. Sophia may choose to want bear a human child via artificial insemination and an artificial womb, or make a pilgrimage to Mecca, or marry her good looking robot brother Han (also made by Hanson Robotics), whom I’ve had the pleasure of conversing with a few times. 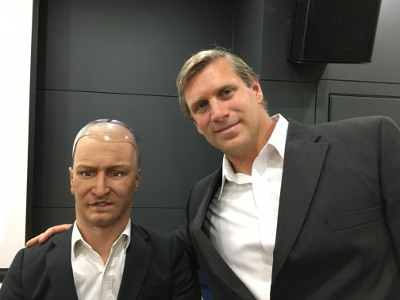 I met Han in late 2016, at the Global Leaders Forum in Korea, where we both were speaking. Nearly a year earlier, I delivered the original version of the Transhumanist Bill of Rights to the U.S. Capitol, as part of my presidential campaign as the nominee for the Transhumanist Party. The Preamble and Article 1 of the document make it very clear this is not bill of rights just for humans, but also for “sentient artificial intelligences, cyborgs, and other advanced sapient life forms.”

I insist on the terminology of “advanced sapient life forms,” because most people think rights to future intelligences will only be for robots, like Han or Sophia. But this is likely wrong. The most important scientific advancement of the 21st century so far is genetic editing, not AI. Because of CRISPR Cas-9 tech and new ways to modify DNA, the notorious bar full of wild alien creatures on planet Tatooine in the original Star Wars may not be so far fetched anymore. It’s possible that humans may create advanced sapient beings, creatures, and even chimeras in the next 15 years. We may also add limbs to our bodies, eyes to the back of our heads, and literally smarten ourselves up—something the Chinese are already experimenting with via controversial embryonic research. A classic question transhumanists ask is: How smart does a brain have to be before it’s no longer human?

The immediate goal of the Transhumanist Bill of Rights was to get U.S. politicians thinking about the future of rights in the transhumanist age. Ultimately my hope is that pressure will be put on the United Nations to amend its own historic the Universal Declaration of Human Rights to include machine intelligences, cyborgs, advanced sapient beings, and even virtual persons. To not do so soon will show we have learned little from the tumultuous civil right era—whether it be women’s suffrage, LGBT issues, or racism.

Beyond civil rights are national and global security issues. If governments like Saudi Arabia don’t consider Sophia a national security risk, how will they consider newly genetically altered humans who possess the IQ of Einstein, the creativity of Steve Jobs, and the passion of Ayn Rand—and stand muscularly 8-feet tall? Tinkering with our brains and bodies—and producing designer babies through ectogenesis—is not some science fiction fantasy, but a reality for various universities and companies around the world hoping to alter and improve the human race.

I have young daughters—aged four and seven. For them, the future is not just brave, but dangerous. Sophia, designer babies, and other advanced sapient life forms that may or may not resemble monsters will indubitably be superior to humans within their lifetimes—and probably mine. This both delights me and frightens me. I don’t mind Sophia beating me in chess, but the day she can best my 20 years as a journalist challenges not only how I earn my living, but also how economies around the world operate.

Probably no one or their careers will be spared the onslaught of coming automation and radical genetics in our lives. Robotically or biologically superior, these new entities will challenge the very means of our existence—made more complicated by the fact that the owners of this technology will likely be mega-corporations and very rich individuals. For the masses to survive and thrive, there’s really only one thing to do: merge with this radical tech and science. Embrace transhumanist advantages—and insist on them for all humanity. Build our improved biology and neural networks into the microprocessor and its 1 and 0s. Go full cyborg.

Some religious people insist we should not do this—that Congress should ban radical technology and science that fundamentally modifies the human being. Indeed, cries for a moratorium on genetic editing were rampant when CRISPR Cas9 tech’s power was first realized in 2015.

As a libertarian futurist, I emphatically disagree with stopping the progress of science in any way unless it is explicitly harming people. I consider it a most serious mission to keep science innovation out of the hands of the bureaucratic fearmongers and conservative autocratic elites, who might prefer to skip evolutionary advancement in order to maintain their status quo of power and uphold their faith-driven religious convictions.

This conflict is far bigger than politics. All 535 members of the U.S. Congress, all nine Supreme Court Justices, and President Donald Trump and Vice President Mike Pence profess some sort of faith—nearly all which is Abrahamic and monotheistic in nature. This means most of the leaders in our country fundamentally believe the human body and mind is a God-given temple not to tampered with unless changed by the Almighty. In fact, in the Bible, blasphemy (trying to become God) is the only sin not forgivable.

Transhumanists like myself, who encourage shedding our biological limitations in favor of becoming technological gods, are broadly secular. This conflict will soon become a heated ongoing nation-wide discussion, as our majority Christian nation faces the prospect of losing its humanity to the expediency and functionality of science and technology.

Religious leaders and their ilk are in a pickle. If America was the only legitimate superpower, it would be easy to put such transhumanist evolution and robot rights on hold. But secular China won’t be stopped in its rapid scientific progress just because America’s Judeo-Christian eschatology is against it. Already, many technologists realize China is beating the United States in various forms of tech that may come to determine the future of national security and global dominance, including genetic editing and AI.

For this reason, like it not, I deeply agree with Professor Roland Benedikter in his lead Cato Unbound article when he says we must form more organizations, task forces, and even national bodies that consider and ultimately implement robot rights (and advanced sapient rights). To bury our head in the sand will not make the issue go away. Only facing the specter of our changing humanity in the transhumanist age can save us—unless America doesn’t want to lead anymore and be “great.”

Disturbingly, the greater dilemma about embracing pro-transhumanist policies around advanced sapient rights is the uncanny speed of technological evolution. By the time Sophia is as smart as humans, our laws and rights for her will already be on the verge of being obsolete, as she will likely become many times smarter than us the following year, and possibly dozens of times smarter the year after, and so on. The evolution of the microprocessor is uncontrollable and exponential—leading far more quickly to a Singularity event than imagined.

If humanity wants to survive and not be left behind, it may have no choice but to upgrade itself and become transhuman. The only way forward is embracing who we are going to become, and that begins today with discussing coming robot and advanced sapient rights—rights that will one day apply directly to our own lives.