Why Malthus’s Gospel of Growth Was, and Still Is, Wrong

Marian L. Tupy and Gale Pooley tell the story of the Simon-Ehlrich wager that Simon won because metals got—and kept getting—cheaper. There is little to disagree with—just three reservations.

First, as my Berkeley mentor Richard Norgaard (economics PhD at Chicago, with Milton Friedman curiously) showed, prices say more about the beliefs of the investors who buy commodities than about long-term physical scarcity.

Second, prices also depend on (un)fair trade, labour/environmental protections, military/geopolitical power, and paying, or not, the social/ecological costs of extraction.

But yes, Ehrlich was wrong about looming shortages and famines. The question is: is this relevant today? I am not sure.

The problem now is not scarcity, but damage. The UN’s International Resource Panel finds that resource use is responsible for 80% of total global biodiversity loss. Impacts at extraction sites are causing hundreds of local conflicts, met with violence.

Resource use grows hand in hand with GDP (Figure 1), even in service economies like the US or the UK where economists expected reductions (Figure 2). And resource cost fell—and extraction increased—because of fossil fuels, which cause climate change. 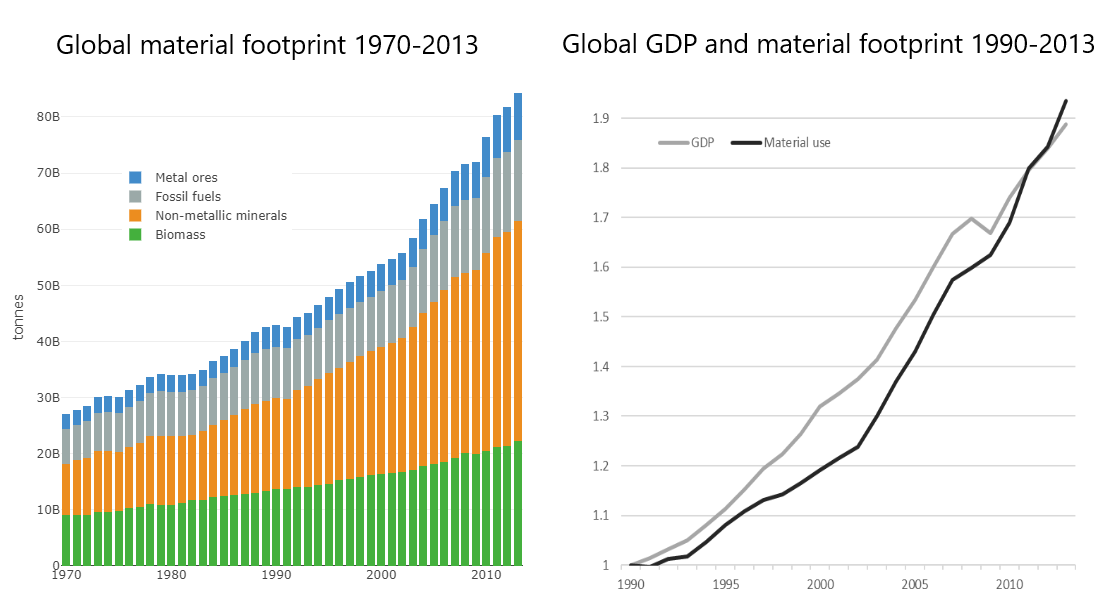 Climate change has been a problem for forty years now. Against Simon’s prediction that we “can forever continue to respond to … existing problems,” there is no progress in reversing global emissions. If you feel upbeat about climate mitigation because Simon won the wager, then you may trust someone who foresaw the LA Lakers championship of 1985 to tell you the winner of the 2024 elections. 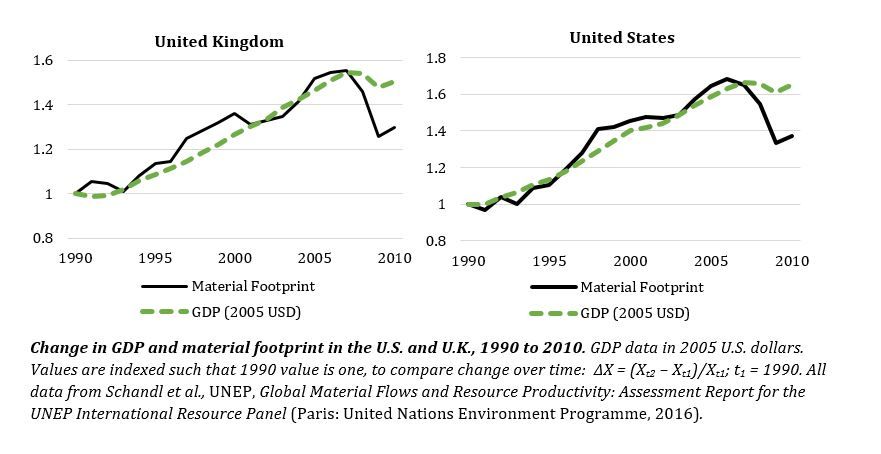 Clean energy technologies advance, but according to optimistic projections the world is bound to 3 or more degrees Celsius increase by 2100, triggering abrupt changes. The higher the GDP, the higher the carbon emissions (Figure 3). Climate modelers square economic growth with a safe climate by assuming unproven and untested “negative emission” technologies in the future (such as tree plantations two to three times the size of India absorbing and storing carbon dioxide from air); and by positing unrealistic increases in energy efficiency. Some countries like the United States or the United Kingdom have decreased emissions while growing, but nowhere near the pace necessary, and partly thanks to slower GDP growth since 2008. 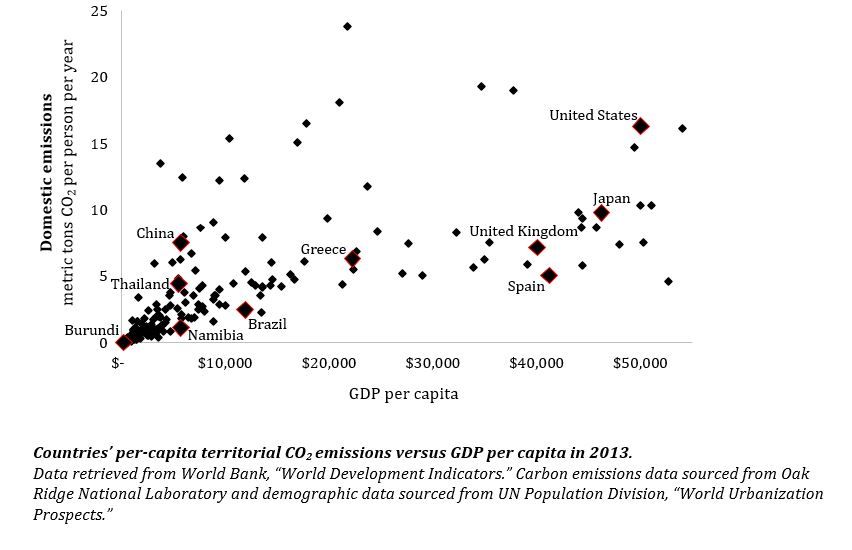 Economists no longer think that climate breakdown will cause just a small dip off a much higher GDP. A lesson from the—miniature in comparison—pandemic disaster is that ecological-economic disruptions are unpredictable and far-reaching. Countries that took the costs of decisive action early on the pandemic have functional economies now. This seems a more relevant lesson than that of the wager. The issue is not whether there are limits to growth, but how to slow down growth now to live well tomorrow.

Come to think about it, the expectation that economies must grow at a compound rate is weird. 3% growth each year means a global economy, big as it is, 10 times bigger by the end of the century, straight towards infinity (Figure 4). As Aristotle pointed long ago, money gives the illusion it naturally grows at the interest rate lent. But something—the environment, debt, insufficient demand or investment outlets—will check infinity. 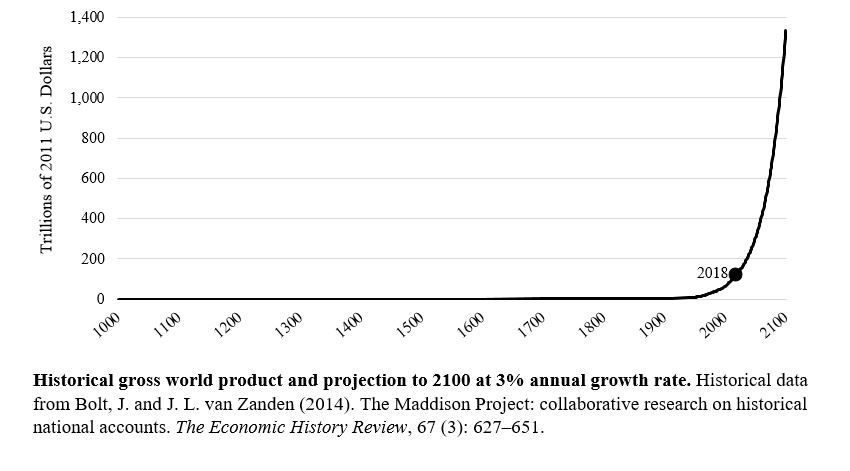 In fact, over the past two decades many high-income economies have experienced a great slowdown. Dietrich Vollrath argues that this is actually a sign of economic success—it’s the product of high living standards, reduced population growth, and a shift to services, where productivity growth is slower.

The problem is that to rekindle growth, governments sacrifice living standards. Not only by destabilizing the climate, but by exploding private and public debt—Quantitative Easing inflating assets, increasing cost of living and cutting public services on top. Growth has become uneconomic; its costs exceed its benefits.

On-going research studies how to manage without growth by reducing the working week, changing money creation, reducing inequalities, or paying a universal income, perhaps funded by a carbon dividend. These are not easy policies. But prosperity without growth is the defining challenge for twenty-first century economics, and better ideas are welcome.

In my book Limits: Why Malthus Was Wrong and Why Environmentalists Should Care, I argue that the 1970s debate between cornucopians and neo-Malthusians is past its sell date. Let me diverge, explaining my rereading of Malthus, because it is relevant.

Malthus’s intellectual biographers show how Malthus was much more of a cornucopian than his neo-Malthusian heirs. In the Essay on Population Malthus claims, like Tupy and Pooley, that we can produce as many commodities as we demand. Unlike Ricardo, Malthus did not see diminishing returns in agriculture. Land produce can grow with no limit, he wrote. For Malthus population growth was the greatest good for a nation. He was against birth control or helping the poor, because he wanted a cheap, excess labour to grow production—the only viable way he saw for growing population closer to the “natural” geometric rate.

Malthus was a cleric and did not put bets, but his prediction was correct. Well, his was not a difficult prediction. Malthus predicted that population cannot grow geometrically—something will check it. Indeed if global population doubled every 25 years from 1 billion in 1800, it would be 500 billion today. But voluntary controls did check it, and Malthus was aware that people could control their numbers. What Malthus got totally wrong instead was that he regarded such voluntary controls as unnatural and repugnant. Voluntary limitations are as painful as famines and plagues, Malthus wrote, because God wants us to work and populate the earth, not idly enjoy its fruits (hence his opposition to birth control).

This gospel of growth, by a cleric who became the world’s first professional economist, has been with us ever since. Malthus was writing about an unlimited drive for reproduction; economics after him instead talked of an unlimited drive for consumption, or more generally “utility”—which requires more and more production, though always falling short of satisfying our unlimited wants. Scarcity and growth then are two sides of the same coin. The cornucopians and the neo-Malthusians are closer to one another than they think.

Yet there is an obvious third possibility—limiting ourselves to avoid scarcity and disaster, and living well with what we have. For lack of a better a word, and being provocative, I and others call this “degrowth”—slowing down so as to live better.

Voluntary limitation is a freedom not to. Freedom rests on limits; think of the canvas a painter needs to paint. Limiting yourself in one aspect liberates you in another (stop smoking and you can now run). Economists, like Malthus, are wrong because people do limit their wants all the time without suffering as a result. Freedom, the classics taught us, is the power to live within one’s own means; mastering is to be content with enough. True freedom cannot be freedom gained at the expense of others’ freedom (say, the freedom of future generations to live on a liveable planet).

You may object here, like Malthus, that limiting growth is tyrannical. But it’s not, if that is what we democratically decide to do. There is nothing natural in compound growth; indeed, most human civilizations had no experience of—or word for—that condition. The idea of continuous growth is relatively recent, a product of the New Deal, when GDP was invented to help governments manage the economy. The Soviets first set annual growth targets in the 1950s, with the OECD following on and kick-starting an era of “growthmanship.” Growth is now like a secular god, a doxa whose truth cannot be questioned, left or right, east or west.

Compound growth started before it was named, with the Industrial Revolution in England. As Sven Beckert’s history of cotton shows, freedom of enterprise, science, and innovation were one part of the story; the other was cheap raw material from slave plantations in the Americas, and the brutal destruction of India’s artisanal silk industries by the British, creating markets for their excess cotton. The material benefits of growth to masses of working people in the West, and now in the East are undeniable—so is the fact that this depended and depends, on keeping the labour and resources of others cheap, by force if need be.

Degrowth is therefore addressed to the Global North, not impoverished countries that need to industrialize and produce necessities. The good news is that satisfactory levels of wellbeing can be achieved at a fraction of the highest national incomes. Costa Rica for example has among the highest life expectancies and wellbeing in the world, at less than one-fifth of the U.S. income. There is no strong case for the Global North to keep growing so as to pull the South out of poverty; not growing on the back of the South would be enough. Right now, for every $1 of aid the global South receives, they lose $14 through unequal exchange with the North.

To close: I fully agree with Tupy and Pooley that a future of abundance is possible. Unlike what Malthus claimed, we have inherited a generous planet, which can remain abundant if we limit our wants within what it has to offer, sharing its fruits fairly. Humans are wondrous, intelligent, imaginative beings, always experimenting with diverse ways of living and of organizing their societies. A monoculture of GDP growth stifles the freedom to choose alternative paths. As disasters proliferate, not for the first or last time in human history, I remain optimistic that societies can transform for the better. Malthus was wrong to think that we cannot limit our wants and change our ways - especially when we finally face with a clear head the consequences of not doing so.