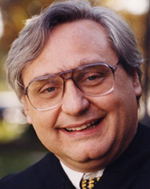 Alex Kozinski is a judge on the United State Court of Appeals for the Ninth Circuit. Judge Kozinski received a J.D. from the UCLA School of Law in 1975 and went on to clerk for Anthony Kennedy, then a judge on the Ninth Circuit, and for Warren Burger, Chief Justice of the Supreme Court. After several years in private practice, Kozinski worked in the White House counsel’s office under President Reagan, and was later appointed by Reagan to the position of chief judge at the Federal Claims Court, and then, in 1985, to the Ninth Circuit Court of Appeals. Widely known for incisively reasoned [pdf] and often amusing [pdf] legal judgments, Judge Kozinski has authored more than three dozen articles in law reviews such as Stanford, Yale, Michigan, and Columbia, and has also written essays and articles for popular publications such as the New Yorker, the National Review, the New Republic, and Slate. Among many other honors, Judge Kozinski is the subject of an internet fan site, and was voted “#1 male Super-hottie” of the federal judiciary by readers of the now defunct weblog, “Underneath Their Robes,” after boldly nominating himself and arguing forcefully on his own behalf.

Response Essays: Reply to Buchanan
The Conversation: Call Me a Panglossian