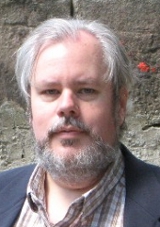 Roderick T. Long is Professor of Philosophy at Auburn University. He is President of the Molinari Institute and Molinari Society; a Senior Fellow of the Center for a Stateless Society; editor of the Molinari Review; and co-editor of the Journal of Ayn Rand Studies and the book Anarchism/Minarchism: Is a Government Part of a Free Country? He helped found the Alliance of the Libertarian Left, and is the author of Reason and Value: Aristotle versus Rand (2000), Rituals of Freedom: Libertarian Themes in Early Confucianism (2016), and Wittgenstein, Austrian Economics, and the Logic of Action (forthcoming from Routledge).

He received his philosophical training at Harvard (A.B. 1985) and Cornell (Ph.D. 1992) and has taught at the University of North Carolina at Chapel Hill and the University of Michigan. He is a self-described Aristotelian/Wittgensteinian in philosophy and a left-libertarian market anarchist in social theory.

January 2021 : The Founders, the Classics, and the Origins of Classical Liberalism

Response Essays: The Benefits and Hazards of the Classical Legacy
The Conversation: Observations and Quibbles