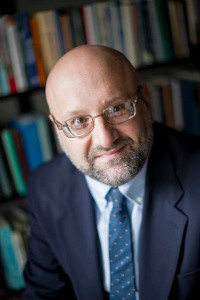 Steven Horwitz is Distinguished Professor of Free Enterprise in the Department of Economics and Director of the Institute for the Study of Political Economy in the Miller College of Business at Ball State University in Muncie, Indiana. He has a PhD in Economics from George Mason University and an AB in Economics and Philosophy from the University of Michigan.

Horwitz is the author of four books, Monetary Evolution, Free Banking, and Economic Order (Westview, 1992), Microfoundations and Macroeconomics: An Austrian Perspective (Routledge, 2000), Hayek’s Modern Family: Classical Liberalism and the Evolution of Social Institutions (Palgrave Macmillan, 2015), and Austrian Economics: An Introduction (Cato Institute, 2020). He has written extensively on Austrian economics, Hayek’s political economy, monetary theory and history, and American economic history. His work has been published in professional journals such as History of Political Economy, Southern Economic Journal, and The Cambridge Journal of Economics.

Horwitz is an Affiliated Senior Scholar at the Mercatus Center in Arlington, VA, a Senior Fellow at the Fraser Institute in Canada, and Economics Editor at the Cato Institute’s libertarianism.org project. A guest on numerous radio and cable TV shows, he is also the 2020 recipient of the Julian L. Simon Memorial Award from the Competitive Enterprise Institute and a member of the Mont Pelerin Society. Horwitz has spoken to professional, student, policymaker, and general audiences throughout North America, as well as in Europe, Asia, and South America. He is also Dana Professor of Economics Emeritus at St. Lawrence University in Canton, NY, where he taught for 28 years.