Americans Eat Too Much Cake, but the Government Isn’t To Blame

Gary Taubes paints a lively picture of lawmaker overzealousness, industry subterfuge, and researcher bias to argue that fat may have been unfairly blamed for the ravages of sugar, and as a result, misguided government dietary advice drove Americans to eat more sugar, ultimately contributing to obesity, diabetes, and coronary heart disease. Yet the key questions Taubes raises cannot be evaluated via historical narrative. It’s time to hang up our tweed blazers and slip into our white lab coats, because Taubes has made specific and testable assertions, which I will evaluate in three parts. First, I will examine the 1980 Dietary Guidelines to determine if they condemn fat and take a weak stance on sugar as suggested. Second, I will evaluate the hypothesis that the Guidelines contributed to obesity, diabetes, and coronary heart disease. And third, I will evaluate the hypothesis that sugar “may be the primary cause” of the three aforementioned conditions.

Inside the 1980 Dietary Guidelines for Americans

In the opening sentence of his essay, Taubes states that “forty years ago this month, January 1977, the federal government entered the business of giving dietary advice,” referring to a congressional report that gave rise to the 1980 Dietary Guidelines for Americans. In fact, the federal government has been issuing dietary advice regularly for over a century.[1] The 1980 Guidelines were, however, notable for the fact that they abandoned the traditional “eat more” approach of diversifying and balancing the diet, in favor of an “eat less” approach of limiting foods perceived as unhealthy.[2]

Taubes argues that this document condemned fat and took a weak stance on sugar. Let’s have a look for ourselves.[3] At the core of the 1980 Guidelines were seven pieces of dietary advice, shown below:

The Guidelines went further, providing explicit guidance on how to “avoid too much sugar”:

A person who faithfully adhered to the Guidelines would end up eating a diverse, largely unprocessed diet composed of whole grains, beans, nuts, lean meats, seafood, dairy, eggs, vegetables, and fruits, with little added sugar, added fat, or highly processed foods or beverages. Are we really to believe that this advice—which clearly and repeatedly recommended eating less sugar—made Americans eat more sugar, leading to obesity, diabetes, and coronary heart disease? Having reviewed the Guidelines, the notion strains credulity, but let’s test it anyway.

Wrath of the Guidelines

Taubes argues that the Guidelines may have unintentionally contributed to obesity, diabetes, and coronary heart disease. This rests on the assumption that the Guidelines themselves substantially influenced American eating behavior, either directly or indirectly via the food industry, and therefore that changes in the American diet over time can be attributed to it rather than to the numerous other shifts in the American food and cultural landscape that were happening at the time.[4] No evidence is presented to support this assumption, so we will examine it here.

Furthermore, we should observe a decline in the consumption of highly processed foods rich in fat and sugar that the Guidelines clearly advised against. To test this prediction, here are the top six sources of calories in the U.S. diet, in descending order of importance, as of 2006:

This list is both disturbing and informative. Cake and related desserts are the number one source of calories in the American diet. Soda, pizza, and alcohol are three of the remaining five items. The average American diet is not even remotely inspired by the Guidelines.

The truth is that we don’t wash down our pizza and cake with beer and soda because we think it’s healthy or because we believe the government recommended it. We do it because we are human beings who are driven by considerations of pleasure, cost, and convenience—precisely the qualities the food industry has been optimizing for the last 40 years.[8]

Taubes assumes that we suffer from increasing rates of obesity and diabetes because we have failed to identify their true cause. Yet the evidence suggests a simpler and more compelling explanation: We eat too much food that is obviously unhealthy, and it’s not because researchers or the government told us to, but because we like it.

According to Taubes, sugar may be a “toxin” and “the primary cause of diabetes, independent of its calories, and perhaps of obesity as well.” Elsewhere in the essay, coronary heart disease is added to the list. Yet Taubes asserts that this speculative hypothesis cannot currently be tested because there is so little existing research on sugar, and so little interest in conducting such research, that “the research necessary to nail it down would take years to decades to complete and is not even on the radar screen of the funding agencies.”

This belief is remarkable in light of the fact that a Google Scholar search returns hundreds of scientific papers on the health impacts of sugar, many of them human randomized controlled trials, and many funded by the U.S. National Institutes of Health. In reality, the health impacts of sugar are of considerable interest to the scientific community, and as such, they have been studied extensively. Having established that this research exists, let’s take a look at it.

Is sugar the primary cause of diabetes, “independent of its calories”? Research suggests that a high intake of refined sugar may increase diabetes risk, in large part via its ability to increase calorie intake and body fatness, but it is unlikely to be the primary cause.[11] An immense amount of research, including several large multi-year randomized controlled trials, demonstrates beyond reasonable doubt that the primary causes of common (type 2) diabetes are excess body fat, insufficient physical activity, and genetic susceptibility factors.[12]

The ultimate test of the hypothesis that sugar is the primary cause of obesity and diabetes would be to recruit a large number of people—perhaps even an entire country—and cut their sugar intake for a long time, ideally more than a decade. If the hypothesis is correct, rates of obesity and diabetes should start to decline, or at the very least stop increasing. Yet this experiment is far too ambitious to conduct.

Or is it? In fact, this experiment has already been conducted—in our very own country. Between 1999 and 2013, intake of added sugar declined by 18 percent, taking us back to our 1987 level of intake. Total carbohydrate intake declined as well.[13] Over that same period of time, the prevalence of adult obesity surged from 31 percent to 38 percent, and the prevalence of diabetes also increased.[14] 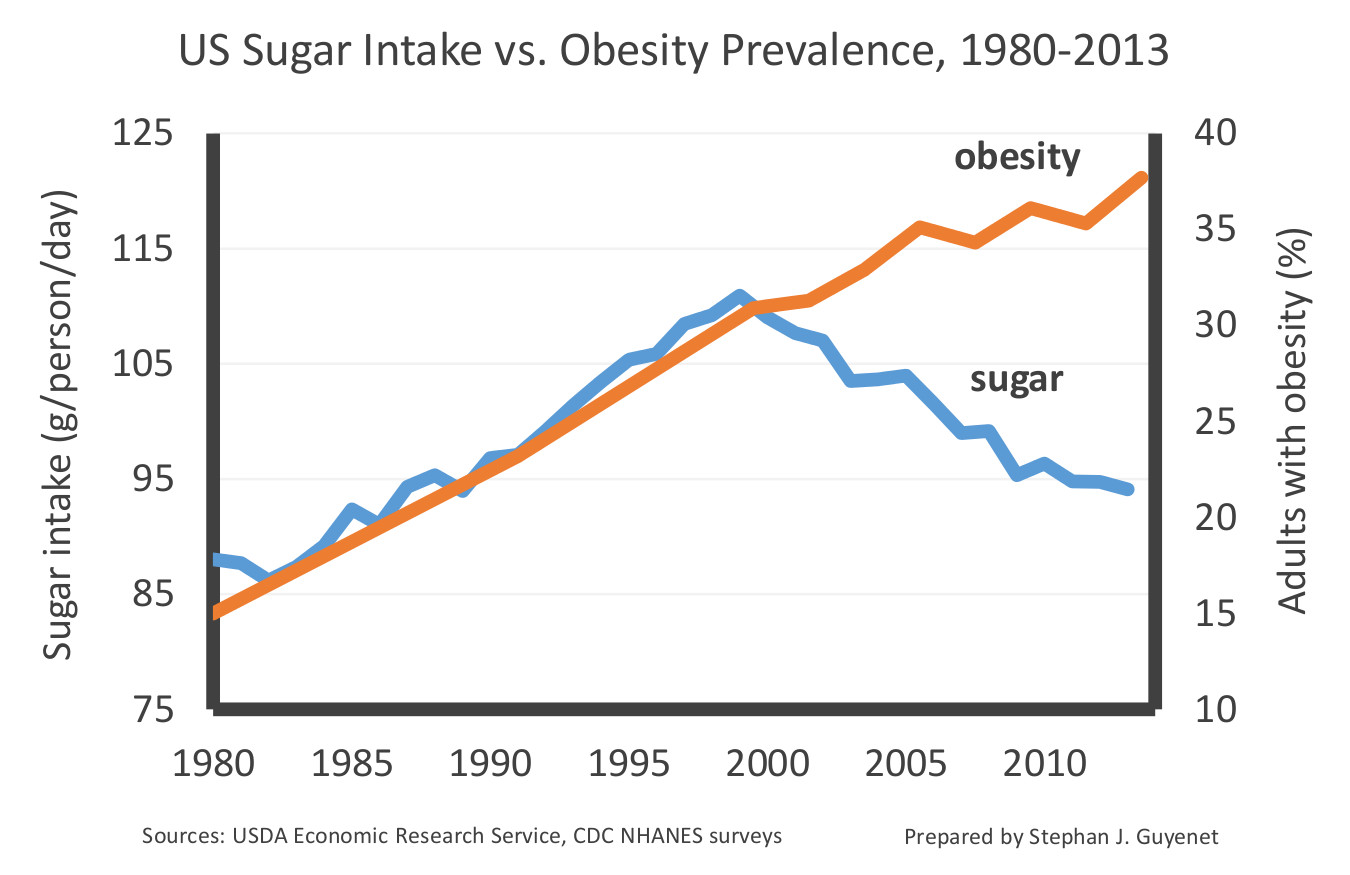 Americans have been reining in our sugar intake for more than fourteen years, and not only has it failed to slim us down, it hasn’t even stopped us from gaining additional weight. This suggests that sugar is highly unlikely to be the primary cause of obesity or diabetes in the United States, although again it doesn’t exonerate sugar. Furthermore, it suggests that the laser-like focus on sugar is a distraction from the true, more complex nature of the problem.

I have presented a small piece of a large body of evidence that is more than sufficient to refute the assertion that sugar may be the primary cause of obesity, diabetes, and coronary heart disease. At the same time, this evidence does suggest that added sugar is part of a broader diet and lifestyle landscape that contributes to these three conditions, a conclusion that is not especially controversial within today’s scientific, medical, and public health communities.

[4] For example, the declining cost of sweeteners and processed food in general, increasing ubiquity of food and advertising, advances in food sensory engineering, and the replacement of home cooking with restaurant and pre-prepared food. I discuss these trends in my book The Hungry Brain.

[5] Taubes has previously argued that the percentage of fat in the U.S. diet declined in the wake of the Guidelines, which is correct. However, this percentage change was due to an absolute increase of carbohydrate intake, not an absolute decline of fat intake. Since our absolute intake of fat remained unchanged, this cannot be interpreted as a decline of fat intake. USDA Economic Research Service - Food Availability (Per Capita) Data System [Internet]. 2016 [cited 2016 Dec 22]. Available from: https://www.ers.usda.gov/data-products/food-availability-per-capita-data-system/. Austin GL, Ogden LG, Hill JO. Trends in carbohydrate, fat, and protein intakes and association with energy intake in normal-weight, overweight, and obese individuals: 1971-2006. Am J Clin Nutr. 2011 Apr;93(4):836–43.

[6] Throughout this piece, the term “added sugar” refers to table sugar, high-fructose corn syrup, honey, and all other calorie-containing sweeteners, including both home use and consumption via prepared foods and beverages. It does not include the sugar naturally found in fruit, vegetables, and milk.