Unintended Consequences, Special Interests, Sugar, and a View from the Clinical Trenches

If in 1977 Americans had actually followed McGovern’s 7 dietary recommendations, they’d likely be a lot better off today. Though McGovern’s recommendations did indeed call for increasing dietary carbohydrates, they recommended their increase come from fruits, vegetables, and whole grains, not Wonder Bread, Froot Loops, and Coca-Cola. They also recommended decreasing red meat consumption in favor of fish and poultry, that poly-unsaturated fats replace saturated, and with their admonishment to limit foods high in salt, sugar, and fat, they effectively recommended that the public shy away from ultra-processed foods – foods which tend to use one or more of those ingredients to create the “bet you can’t eat just one” phenomenon of hyper-palatability.

Pertinent to this discussion, the guidelines also expressly called for a drastic reduction in sugar, recommending it account for no more than 10% of Americans’ total daily energy intakes. (But they did likely get eggs wrong – the evidence suggesting that there’s real benefit to limiting dietary sources of cholesterol hasn’t stood time’s test.)

Taubes asserts that America’s dietary guidelines, starting with McGovern’s purported low-fat call to arms, led to fat’s unintended dietary replacement with sugar and simple carbohydrates. Whether it’s fair to call America’s current dietary woes the “unintended consequence” of not actually following recommendations that also explicitly called for a severe reduction in dietary sugar and ultra-processed foods, there’s no disagreement that the guidelines were not followed. And while a diet that provides 30% of calories from fat, as McGovern’s recommended diet did, isn’t fairly describable as a low-fat diet, Taubes’ point that over-simplified messages risk unintended consequences is an important one – and one we should be reminded of when we see headlines suggesting butter to be not just benign but rather a health food.

Truth be told, despite the inference that Americans replaced dietary fats with simple carbohydrates and sugars, the data would suggest that Americans consume just as much fat as they always did – it’s just that they’re consuming more of everything else. While the percentage of a person’s daily energy intake coming from dietary fat has indeed dropped, the absolute amount of dietary fat being consumed hasn’t changed since at least the very early 1970s. 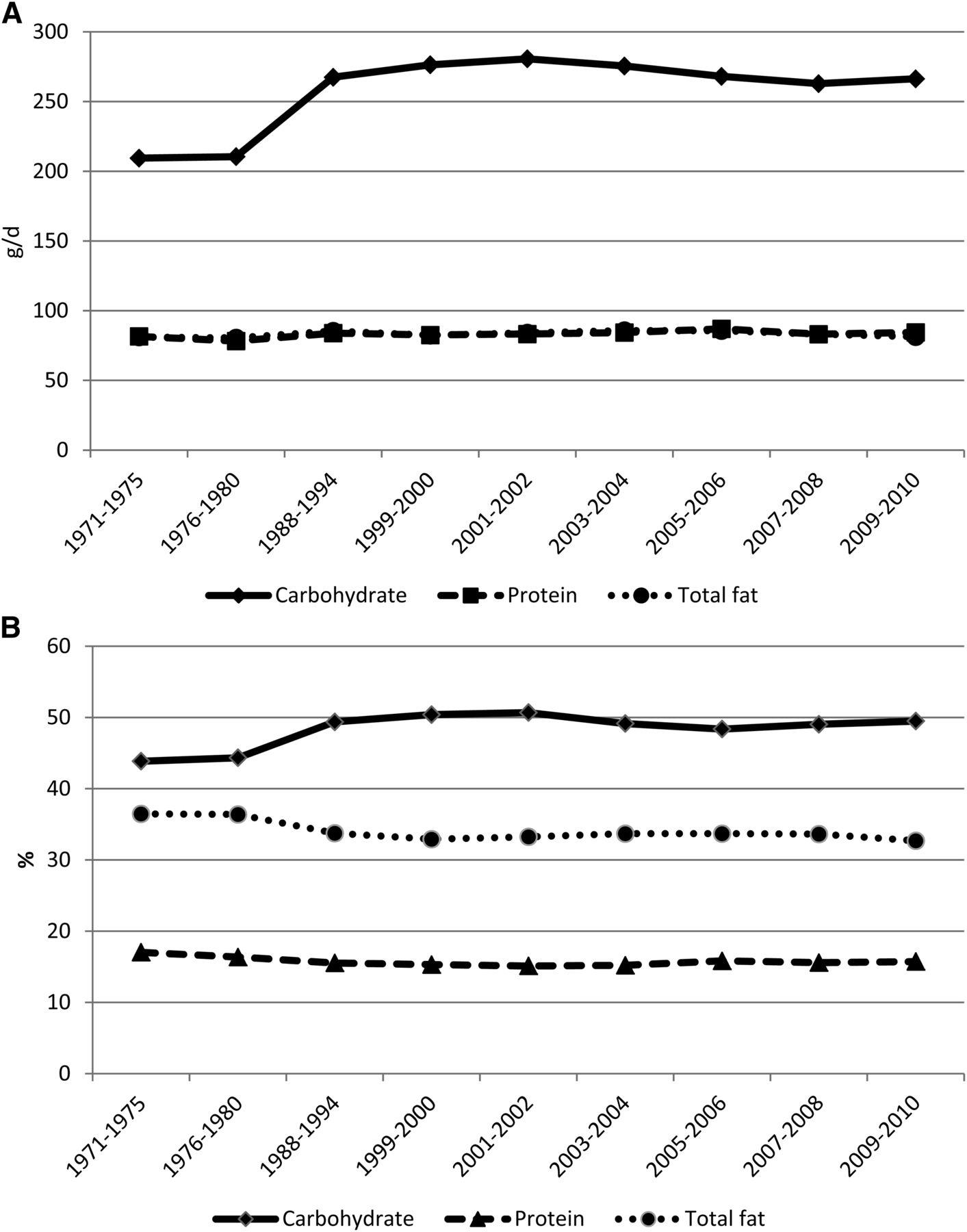 Unfortunately, we don’t have great dietary consumption data to draw upon. Instead we’re left to expound on studies reliant on food frequency questionnaires, which in turn have been shown to be extremely unreliable. One recent scathing review of the use of dietary recall and food frequency questionnaires asserted that their use was “akin to creation science in that they fail to meet the basic requirements of scientific research.

So while it’s fair to point out the flaws in the science that built the case against dietary fats in the 70s and 80s, it’s also fair to point out that there are flaws as well in building the case against sugar, as those who are building it can’t help but also use much of that same challenged pool of dietary evidence. Worse, we may never have the means with which to determine truly specific causal factors when it comes to diet and health, and that’s not even considering the incredible number of confounders that freely living human populations possess. For example, even in captive populations of genetically identical mice fed tightly restricted and controlled diets, there are dramatic confounders, whereby a captive mouse’s living arrangements (eg. noise, bedding, light, the pH of their water, the microbiome prevalent from each particular vendor’s mice, fecal oral eating, and more) have been shown to markedly affect study outcomes, including their metabolic responses to identical diets.

This all helps to explain why Taubes’ assertion that “[t]he ‘best sense of the data,’ however, will always depend on who is asked” rings so true. With decades of food frequency questionnaires informing hundreds if not thousands of studies, and given the degree of confounding that exists from person to person let alone from nation to nation, there is something for everyone in the scientific literature. And given no one is free from confirmation and intellectual sunk cost biases, cherry picking to make the case against fat or sugar is neither difficult nor surprising to see.

What’s also not surprising is that there are scads of conflicts of interest in nutrition. Dietary recommendations are big business for the food industry, while recommending diets is big business for publishing. The weight loss industry has been reported as being a $60 billion per year juggernaut in North America alone, and that doesn’t include the dollars involved in the pursuit of different dietary strategies selling health (which would include such things as organics, GMOs, gluten, and other dietary recommendations and fads).

Taubes’ work compellingly cultivates concerns about the many conflicts of interest inherent to nutrition science. It’s important though to note that financial conflicts with the food industry have never been shown to be uniquely influential among all financial conflicts. Equally worthy of consideration are funding by nonprofits with established and specific points of view, as well as of course personal profit – where some have translated their take on nutrition science into massive book and speaking deals. So while Taubes justly notes that sugar science is speculative, unambiguous statements and cherry picked data are certainly not exclusive to the public discourses of nutrition researchers about dietary fats.

Conflicts aside, there’s no denying the rise of chronic, non-communicable diseases (NCDs) since the McGovern era. So where to lay blame? Well, we’re definitely eating more. Portion sizes have grown, both in our homes and when eating out. We’re spending 18 times as much money as we once did in restaurants. We’re purchasing twice as much processed food and sweets as we did in the 80s. The Don Drapers of the real world command multi-billion dollar junk food marketing budgets, and are spending – this is not a typo – 150 times more than in the 80s, to specifically target children. Our teachers, coaches, and camp counselors use junk food to reward, pacify, and entertain our kids at nearly every turn. And there seems to be no occasion too small to not warrant celebrating it with junk food. And it’s not just that we’re eating too much, what we’re eating is a mess.

Studies conducted in developing nations show the rise of NCDs to proceed in near lockstep with the introduction of a so-called westernized food supply. Our best evidence currently points to ultra-processed foods as the causal culprits, with a basic definition of ultra-processed being:

Ready to consume (or heat) formulations manufactured from cheap ingredients either directly extracted from whole foods or processed from components extracted from whole foods (e.g. high-fructose corn syrup). These products typically contain the addition of preservatives and “cosmetic additives” and are usually energy dense with high fat, sugar, and salt contents and with little or no water, fibre, micronutrients, or other “protective bioactive compounds” which exist in whole foods.

We don’t fully know what it is about ultra-processed foods that leads them to be so tightly linked to NCDs including obesity and diabetes. While the prospect of a single, causal, Occam’s razor-esque nutrient to blame is both seductive and hopeful, science has not clearly identified one. Loss-adjusted food availability data, bolstered by documented portion size and spending pattern changes, offers more objective data than dietary recall surveys, but at this point such studies only clearly finger our eating much more than we ever did. That said, there’s no doubt sugar is a major raindrop in our flood of excess calories, serving as one of the primary drivers of hyper-palatability, as well as a key ingredient in a large percentage of likely less sating, ultra-processed foods, and especially of the sugar-sweetened beverages of which we’re drinking a great deal more.

Discussions of which nutrient to blame may further confuse an issue that doesn’t benefit from the confusion, especially when viewed from the clinical trenches. While Taubes feels very strongly about knowing “beyond reasonable doubt” the triggers of obesity and diabetes, and the specific role of sugar in human health and disease, and putting aside the possibility that sometimes multiple roads lead to the same destination, as someone whose full time daily job for the past 13 years has been to work with individuals on improving their lifestyles, I think that looking only to sugar misses the forest for the trees when it comes to helping people to improve their health.

As a clinician with a full time behavioral weight management practice, and as a fierce public health policy critic, I believe that pragmatism and realism are more important than idealism and rigidity in cultivating behavior change. While I would readily agree with Taubes that sugar reduction is a very worthy goal, as a goal it’s simultaneously not enough, and too much. It’s not enough as there are many other actionable areas ripe for behavior changes which if enacted would markedly reduce a person’s risk of developing NCDs, and it’s too much in that with food certain to forever serve all of us in roles of both comfort and celebration, sugar’s singular demonization, if embraced, may lead to calls for extremes of action that even if enacted, aren’t likely to be enjoyable enough to be sustainable for most.

History also informs us of the risks of single-nutrient battle cries. The excessive amplification of “low-fat” messages enabled the sale, and likely encouraged the consumption, of ultra-processed low-fat foods. With this as our backdrop, let’s hope that public health policy makers heed Taubes’ warning that,

Whatever actions we take, though, are likely to have unintended consequences. One of them is further ingraining the precedent for taking other actions that are likely to be wrong and damaging as well.

We should offer diet guidance far more broadly than just on sugar so as not to unintentionally fuel a surge in the manufacture and consumption of  new low-sugar ultra-processed foods. There are incredible health benefits to be had from looking at broad based behaviors; an emphasis on sugar alone might overlook them. Behaviors such as:

This sort of back to basics approach is what underlies Brazil’s recently published and highly praised dietary guidelines, where rather than try to distill divergent, challenged, and often conflicted studies into a set of highly specific recommendations, their aim was to encourage much broader patterns of healthy eating and living. Were Americans as a whole to adopt even just the aforementioned 7 behaviors, not only would their sugar intake be reduced, but so too would the burden of many NCDs.