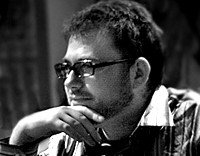 Matthew Yglesias is an Associate Editor of The Atlantic Monthly. His first book, with the working title Heads in the Sand: Iraq and the Strange Death of Liberal Internationalism, scheduled to be published next spring by John Wiley and Co., deals with the Democratic Party’s struggle to find a post-9/11 foreign policy, focusing primarily on the rise and (hopefully) fall of the liberal hawk movement.

Previously, he was a staff writer at The American Prospect and an Associate Editor at TPM Media, where he contributed to the group blogs Tapped and TPMCafe. His main blog, now at The Atlantic, has existed in various forms since the dark ages of the blogosphere in January 2002.

His writing has appeared in The Guardian, Slate, The New Republic, The Washington Monthly and he is a regular on BloggingHeads.tv and makes the occasional radio or television appearance.

Desperately out of touch with the American mainstream, Yglesias was born and raised in Manhattan and studied philosophy at Harvard where he was editor in chief of The Harvard Independent, a campus alternative weekly.